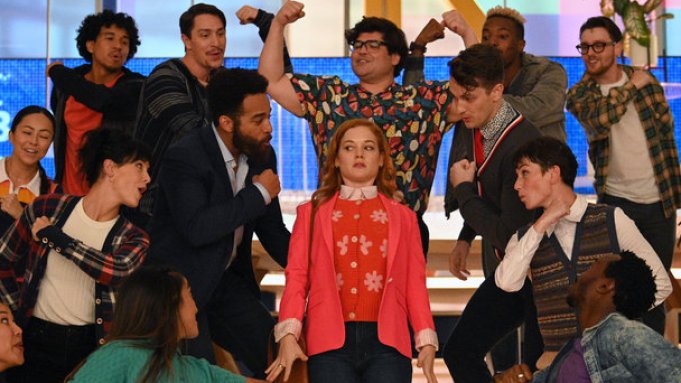 Zoey’s Extraordinary Playlist is returning to NBC for its second season on January 5.

The musical dramedy ended its first season [SPOILER] with the death of Mitch, the father of Jane Levy’s Zoey Clarke.

As such, the sophomore season will lean into this grief, while also doubling down on the big musical numbers that the show is known for.

In a promo for the second season, which features footage of the upcoming episode, stars Jane Levy, Mary Steenburgen, Alex Newell, Skylar Astin and John Clarence Stewart give hints about what to expect.

“We ended last season of Zoey’s Extraordinary Playlist on a very emotional goodbye. Season two, we pick up seven weeks after season one, Zoey has been living at home and Zoey hasn’t heard a Heart song since Mitch’s death. Season two explores how we move on after losing someone,” said Levy.

“You better believe we have a lot of amazing musical numbers, choreographed by Emmy winner Mandy Moore,” she added.

Moore, not to be confused with the This Is Us star, helped the show win the Emmy Award for Outstanding Choreography for Scripted Programming in its freshman season. “We’re going to do huge productions and it’s all right at Zoey, which makes her very uncomfortable,” said Moore.

The second season will also explore the love triangle between Zoey and Skylar Astin’s Max and John Clarence Stewart’s Simon. “I think there’s a lot more to expect from that love triangle, especially as it pertains to Max and Simon as friends,” said Astin.

Following the tragedy, Zoey and the Clarke family also begin to recalibrate and navigate their new normal. As she finds herself in a new dynamic at work and in her love life, Zoey’s musical powers will continue to both awkwardly complicate and inform her worldview as she attempts to rediscover joy and connect with those around her.