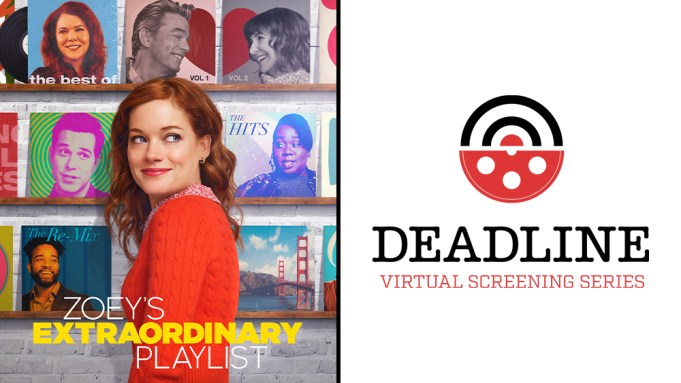 Deadline’s Virtual Screening Series got a shot of adrenaline this week with a screening and Q&A with some key movers and shakers from NBC’s growing hit musical series, Zoey’s Extraordinary Playlist. The show revolves around the title character, played by Jane Levy, who finds she has an extraordinary super power of being able to hear the inner thoughts of those people around her , but with a catch, they are all in the form of popular songs and big musical numbers.  Unique, to say the least and it is all the brainchild of series creator and Executive Producer Austin Winsberg who joined me after a screening of an episode in which Zoey temporarily loses those powers and instead finds herself breaking into meaningful song at the most awkward of moments.  In addition to Winsberg, our virtual Q&A included star Levy, and choreographer and producer Mandy Moore , the latter winning an Emmy for the show’s first season.  In fact season two actually premiered the same night as our special Virtual Screening event. This is a very ambitious show, with big musical set pieces included with the ever-evolving storyline that takes place alternately between Zoey’s career and life in the office, along with her personal life at home.

Winsberg explained the idea for the show came from his late father’s own struggles with a debilitating brain disease that robbed him of cognitive functions including the ability to speak and move, and eventually he passed away.  This doesn’t exactly sound like the fun elements for a big network musical comedy series, but Winsberg was inspired.  “I was becoming a dad while losing my father, and I just felt like I needed to write something about that time, and I had gotten into writing musicals. I wrote a Broadway musical, I did the live The Sound Of Music for NBC, and I just felt like, what if the way that my dad saw the world during those last several months was through big musical numbers? And when I thought of that idea, it was the first time that I kind of contextualized the sadness of that, and made it not just feel sad, but sort of joyful and hopeful, in a way,” he said. “And then, I thought, maybe that feels a little too small, too sad, but what if a character gets the ability to hear people’s innermost thoughts through musical numbers? And then, if they could do that, then maybe they could actually talk to their dad. So, it was a little bit of wish-fulfillment for me, of being able to have these conversations with my father, and see what my father was experiencing during those last six months. So, that was really the genesis of all of it.”

Thus the birth of a hit network show.   In the first season Mary Steenburgen plays Zoey’s mom while Peter Gallagher took on the role of her father stricken with this life-robbing disease. Lauren Graham played her boss in season one.  And key to all of it was in casting the right Zoey. “The casting was one meeting with Jane, saying, ‘will you do this?’,  and getting Jane to say yes. You know, it was such a thin needle to thread with this character. I needed it to be somebody who could be comedic, who could be emotional, who could be musical, who could be believable as a computer coder in San Francisco, who could be a little bit socially awkward, but rootable, and the leading lady. It had to check a million boxes, and watching some of Jane’s past work, being a fan of Jane’s,  I didn’t know the extent of Jane’s amazing singing and dancing abilities, but I knew that Jane could play all of the comedy and the drama of it, and the real of it, and be relatable, and somebody that you could believe was going on this journey,” he said.

For Levy it was manna from heaven to get the part. “It’s been such an amazing process. I feel like I’ve learned so much about Zoey as we go along, and you know, I don’t even know if I knew the extent of my abilities before I did this show. Austin and Mandy both pushed me, and I’m really happy they did, because I’m more proud of it than anything I’ve ever done, and I’ve just really discovered parts of myself while discovering parts of Zoey. It’s such a great role to be able to play. I mean, she has a superpower. She is grieving, but she’s also a goofball.  I get to do so much in this show. I get to do physical comedy, farcical comedy, rooted family drama, singing, dancing. It’s a dream role for me,”  she said.

Moore who has an enviable career as one of the most sought-after choreographers in the business , the Oscar winning La La Land among her credits, took home an Emmy right out of the box for her work on the first season. She also carries a producer title for the series as well, an example of the importance of her involvement in this project. She also believes in the musical form, whether on the small screen like this one, or big screen like La La Land.   “You need people like Austin to create those kinds of shows, and you need people like Jane to put those feelings and those stories up on their feet. I think people are open to it. You know, I think something like La La Land could’ve been the film that people didn’t like, but it really struck a chord with people, and I think opened the door to a lot of people enjoying something that maybe they didn’t know they could enjoy,” she said while adding she has the same confidence people will warm to Zoey’s in much the same way.  Early ratings for their season opener would seem to indicate they are doing just that.

To watch part of our conversation just click the link above.