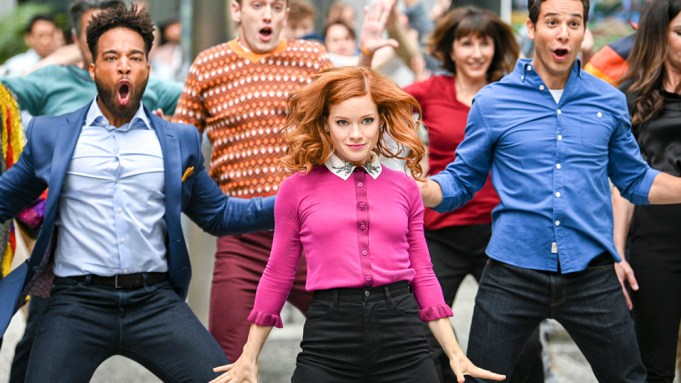 EXCLUSIVE: The new NBC Sunday night musical series Zoey’s Extraordinary Playlist, which is about the title character, played by Jane Levy, who has the ability to hear the innermost thoughts of people around her in terms of  popular songs and big dance numbers, has been building a dedicated following and is a priority I am told when it comes to the network’s Emmy campaign plans. This coming Sunday’s special episode, “Zoey’s  Extraordinary Silence” ought to add to the buzz with a storyline involving the deaf community, and in particular a musical number produced in association with the Deaf West Theatre Company set to the Rachel Platten pop tune, “Fight Song”. You can see a featurette about the making of the episode by clicking the link above.

The number takes place  in the deaf dorm on a college campus , and features the primary deaf character in the episode, Abigail, played by  Sandra Mae Frank who had performed in the Deaf West production of Spring Awakening in L.A. and on Broadway. The series’ choreographer, as well as a producer of it, Mandy Moore worked closely with Deaf West Artistic Director David Kurs in putting together the cast for the number, about ten of them coming from different regions of the U.S. to round out the versatile performers needed, all of them deaf and using American Sign Language. It was a unique challenge for Moore, who has had her share of them, including as choreographer of the Oscar-winning La La Land.

In a phone conversation earlier this week she told me the idea to do the episode and the number came from the show’s creator Austin Winsberg, who was familiar with Deaf West in L.A. and had seen a bunch of shows there and was excited about the idea of bringing them into his series.  A lot of work went into it. “I realized very quickly that I was going to need to do some preproduction on my end, not only to make the routine, but also just to learn ASL because people think that dance and ASL go very beautifully together. I think ASL is so fluid and kind of looks like dance of the hands and stuff,”  she said while acknowledging part of the difficulty was in making a clear translation of “Fight Song” into American Sign Language, but also learning there really was about a hundred different ways it could be translated. a very tricky assignment.

“And in that rehearsal process it was very telling. Holy smokes, everything I thought I knew I threw out as soon as I got in the room which was really beautiful, fun and scary, but very cool. And we worked for about three hours I think in that initial preproduction rehearsal, and it was trying not only to understand what signs we were going to do for what words, but also adding a bit of movement to it. So say you’re signing a certain word with your hands, but then you might stomp with your feet, or you might turn around 180 and turn the other direction. Funny enough, that can really take away from the beauty and the clarity of the ASL, so that communication and that understanding and that creation took a long time to figure out,” she said.

Of course Moore, who is also an Emmy winner for So You Think You Can Dance and Dancing With The Stars, has conquered challenging numbers before including staging that amazing opening musical number in La La Land set entirely in a traffic jam on a Los Angeles freeway, but this was different as she explained. “I think each number honestly has their challenges. I will say that this is probably one of the most challenging things I’ve ever done because you’re going into a situation where you don’t have the tools, like part of the tools you need to build a house you don’t have, you know? I just wanted to respect the language because I just didn’t want to make some stupid dance that just made a mockery of this beautiful language, right? It was really hard tonally just to figure out what was right and to make sure that all these performers felt trusted and heard in a way that they could express how they feel about something, because they’re all really incredible performers and actors, you know? And so, it was really interesting to hear them, which is so weird to say hear, but to listen to them, and to the translators and debate what was the correct sign for a certain emotion or certain word.”

Moore is happy she was able to part of such a groundbreaking kind of performance on network television, a performance of a song but with no singing. From the beginning Winsberg was adamant that it would be done this way, without subtitles, even though Moore says some people may not get it, but that’s okay. “It’s very beautiful when you watch it and you feel it. You know I think you watch it and go like, wow, this is something I don’t really know anything about,” she says adding that it is really exciting and gratifying to not only be a choreographer of a weekly series with ever changing needs, but also becoming a producer on the show and getting in on the ground floor of decisions, being able to help guide and craft the musical content.

“It is its own little unique thing. You know people watch it and they just go like, wait, what is this?, and then you’re somehow like drawn into it in a  kind of quirky, weird way. Obviously Jane is a superstar, like I just cannot say enough about her,” she said. “And I mean personally, I love the writing. That’s also why I was drawn to the project, because I love the writing, I love the idea that dance can live in a very different world in Zoey’s world, you know that it doesn’t have to be sequenced and turns and jumps and kicks, but it can be real-world people moving through a real space singing in a real way. I just think there’s something very unique about it. It’s a really beautiful show.”