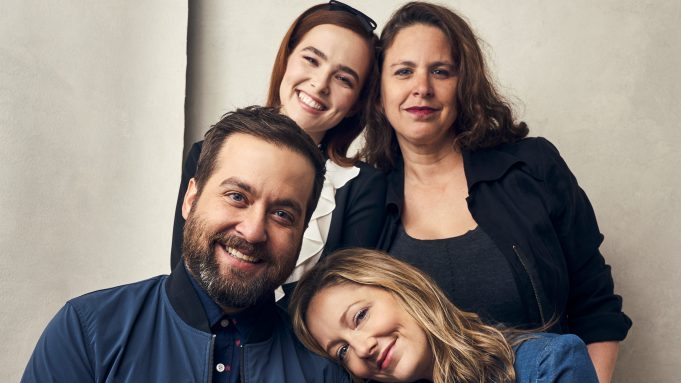 While working in New York on Netflix romcom Set It Up, Zoey Deutch was reading one script after another, “and nothing was speaking to me.” Then, she was approached by producer Brooke Davies with a project called Buffaloed, and simply “lost [her] sh*t.”

In Tanya Wexler’s outlandish comedy, Deutch stars as Peg, a Buffalo, NY hustler looking for a venue to capitalize on her innate intelligence and charm. Coming upon an underworld of debt collectors operating within her city, Peg takes the scene by storm, starting her own business and taking a page out of John Carpenter’s playbook, with an eye toward making her own escape from New York.

Coming aboard Buffaloed in its earliest stages, Deutch served as a producer on the pic, and was integral to bringing its vision to life. “She knew, every single step of the way, every minute change that had been made,” co-star Judy Greer told Deadline in Tribeca. “She [was] never not working on making it better…and it was really inspiring.”

For Deutch, there was no great challenge in playing Peg, or pulling double duty on the production, in comparison to experiences she’d had on other films. “I’ve had the opportunity to play a one-dimensional female character in a male-driven comedy before, and that’s really hard because you can’t do anything, no matter how much work you do, no matter how hard you try. No matter how much you want to add depth, and humor, and heart, and soul into that, they don’t want you to, and at the end of the day, you are at the mercy of somebody else’s decisions,” the actress said. “Now, I’ve been lucky enough to get to play a couple baller, badass motherf*ckers, including Peg, and it’s just not hard in the same way.”

Like Deutch, Wexler came to Buffaloed from a place of significant frustration. “After being down to I think the top two choices for about seven big studio films, and the guy got it every time, I called my agent and said, ‘Only send me movies with women shooting people,’ because I was so pissed off,” she said. “The first scene of this is Zoey’s character with a giant gun in the air, yelling, ‘Don’t f*ck with my f*cking money,’ and I knew I had to make the film.”

The scribe behind Buffaloed, Brian Sacca wrote the comedy with a specific goal in mind. “I had always wanted to make a movie with a strong female protagonist,” he said, sitting down at Deadline’s Tribeca Studio with Wexler, Deutch and Greer. In a friend’s story about “horrible debt collectors” from his hometown, Sacca found the perfect venue to do so, telling “a story of a woman being as bad as they are.”

For more from our conversation with the Buffaloed team, take a look above.