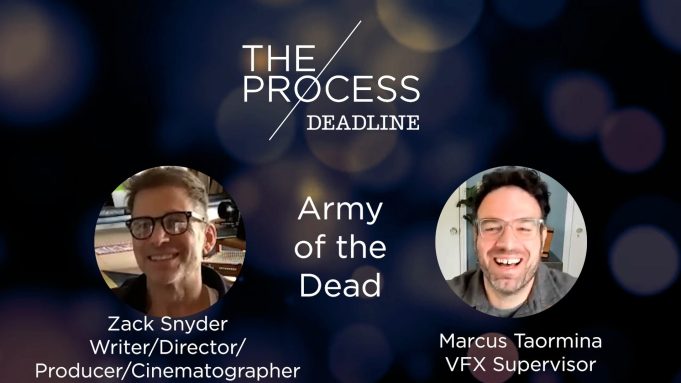 On Army of the Dead, VFX Supervisor Marcus Taormina was tasked with realizing an epic vision on the part of writer, director, producer and cinematographer Zack Snyder, involving a post-apocalyptic Las Vegas and a zombie tiger named Valentine, along with nukes, helicopters, gunplay, explosions, an ample supply of gore and countless other ancillary items.

In the case of Vegas, Taormina would build on the Albuquerque and Atlantic City sets of production designer Julie Berghoff to help Snyder achieve “huge, scopey shots”—heading to Nevada for an intensive LiDAR scan of Sin City, before digitally expanding its skyline and introducing such iconic landmarks as the Statue of Liberty and the Eiffel Tower, which he would of course later destroy.

Interestingly, when it came to the creation of Valentine, Big Cat Rescue’s Carole Baskin ended up playing a role. On one Saturday during filming, Taormina flew out to Tampa, Florida to capture footage of one of her tigers. And about one month later, he was stunned to recognize a voice in a new show his wife was watching, which would quickly take the world by storm. “I remember calling you and [producer] Debbie [Snyder] as well like, ‘You’re not going to believe this. The tiger that we captured is Tiger King Carole Baskin’s tiger, Sapphire,'” Taormina recalls, in conversation with Snyder, in the latest edition of The Process. “That was wild, and it was so much fun. It was just another fun kind of Easter egg for us in this whole process.”

Snyder’s Netflix film watches as a group of mercenaries takes the ultimate gamble, venturing into a zombie-plagued Las Vegas, in hopes of pulling off the greatest heist ever attempted. One last, epic challenge for Taormina and Snyder on the project came in the middle of the pandemic, when they learned about a sexual misconduct scandal involving cast member Chris D’Elia. The director decided at this juncture to digitally replace the actor, even if it would cost millions of dollars to do so, with Emmy nominee Tig Notaro taking over his helicopter pilot part.

Notaro would perform alone against a green screen, later being inserted into huge ensemble scenes captured with a handheld camera, in shots Snyder had designed to feel as organic as possible. This, of course, was a major “lighting challenge and matching issue,” per the director, though he says he wound up enjoying the process of carefully “reproducing” shots.

“Tig was a huge asset and didn’t bat an eye, didn’t question us. I would’ve questioned us, but she didn’t question us at all,” Snyder says. “But I’m sure she was afraid on the day, a little bit. She had to have been.”

While Snyder took on more creative responsibilities on Army of the Dead than he had on past films, he wasn’t daunted by the challenge, instead finding that wearing multiple hats allowed the production to proceed more quickly and efficiently than ever. “I found it was a really great experience,” he says. “It was literally one of my favorite filmmaking experiences, just because it was so relentless on one hand, but also we got so much done.”

Army of the Dead also stars Dave Bautista, Ella Purnell, Ana de la Reguera, Omari Hardwick, Theo Rossi, Matthias Schweighöfer, Nora Arnezeder, Hiroyuki Sanada, Garret Dillahunt, Raúl Castillo and Samantha Win, among others. It became one of the most-watched original Netflix films yet, following its May 21 debut on the streamer, and has already spawned a franchise including the recently released prequel Army of Thieves, upcoming anime series Army of the Dead: Lost Vegas, and direct sequel Planet of the Dead, which is currently in development.

On the heels of their first collaboration, Snyder and Taormina are already back at work together on the sci-fi epic, Rebel Moon. In the second installment of The Process for the 2022 Oscar season, they offer a deep dive into Army of the Dead‘s worldbuilding, also pitching an idea for a sequel, stemming from a wrinkle in the logic of the first film.