Continue to Deadline SKIP AD
You will be redirected back to your article in seconds
Skip to main content
August 24, 2021 12:51pm 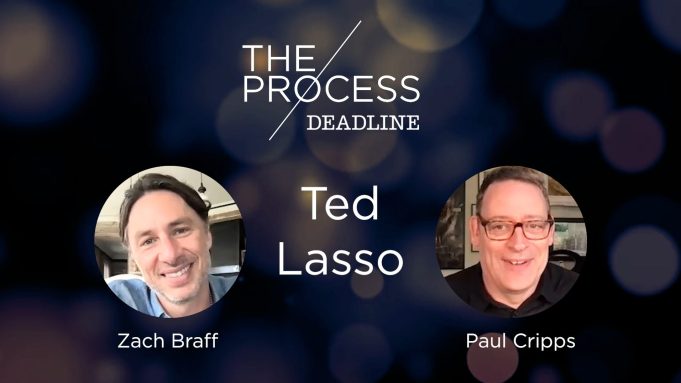 While director Zach Braff and production designer Paul Cripps had little time together on the set of Ted Lasso, they both proved key in establishing the world of the series, during its first season.

When Braff came aboard to helm Episode 2, “Biscuits,” he was the first person to shoot in key sets, helping to establish the show’s look and tone, and pioneering techniques in shooting football, given restrictions placed on the production by local greensmen.

Cripps, meanwhile, was aboard for all 10 episodes, bringing each of the show’s key sets to life. For his work, he earned his first Emmy nomination, as Braff notched his first for directing, having been nominated for his starring turn in Scrubs back in 2005.

The heartfelt comedy, developed for Apple TV+ by Bill Lawrence, Jason Sudeikis, Brendan Hunt and Joe Kelly, centers on Ted Lasso (Sudeikis), an American football coach who heads to the UK to manage an elite British football team, with no prior exposure to the sport.

Lawrence and Sudeikis joined Cripps in the UK for a few early location scouts, or “recces,” during which they settled on the city of Richmond as a main setting for Ted Lasso. Still, the production designer was virtually on his own when it came to set construction, “just building stuff and hoping people liked it” until key creatives flew back for production on Season 1.

From the perspective of Cripps, Ted Lasso was, in essence, a workplace comedy. Part of his mission with the series was to make its sets as real as possible. But he also devised them with built-in flexibility—with walls that could fly in and out. This would allow for both the long walk-and-talks now associated with the comedy, and adaptability suiting a rigorous TV schedule.

“I don’t even know if people that watch the show can really fully understand the level of detail you put into those sets,” Braff tells Cripps, “but they are just so realistic when you’re in there.”

The Ted Lasso creatives were recently reunited for a craft conversation, as part of Deadline’s video series, The Process. During their wide-ranging chat, Cripps further breaks down his approach to key environments, explaining why the office designed for AFC Richmond owner Rebecca (Hannah Waddingham) was by far the most complicated.

For his part, Braff touches on the rickshaw rig he helped conceive for football scenes, his “grad school” experience on Scrubs, as an actor aspiring to direct, the challenge of managing the pace of production as a TV director, his experience hosting SNL back in 2007, and the advice Conan O’Brien gave him in advance, a saying from Michael Caine that’s always stayed with him and more.

Other topics discussed include the differences in approach to production in the U.S. and UK, Braff and Cripps’ shared experience working in the “crazy, creative playground” of music videos, and the memorable tree hat rack Cripps designed for Ted Lasso, among others.