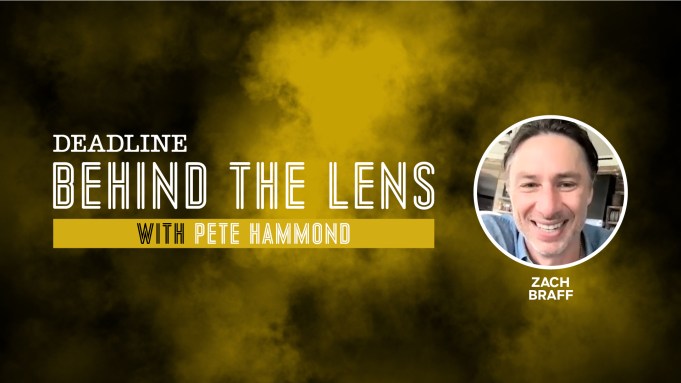 Hard to believe that Zach Braff was only Emmy nominated once (in 2005, for Best Actor in a Comedy Series) during the entire nine-season run of the much acclaimed Scrubs. But surprise surprise, Braff this year has received his second Emmy nomination, not as an actor but as a director, for the second episode of Ted Lasso. The Apple TV+ series received 20 nominations overall, the highest number ever for a first-season comedy series.

Ted Lasso comes from co-creator Bill Lawrence, who as it happens was also the creative force behind Scrubs, and he and Braff have been the best of friends ever since. Braff’s episode, “Biscuits,” is one of three from Lasso up for Outstanding Direction of a Comedy Series, and he is very excited about it, no matter how unexpected his latest trip to the Emmys has turned out to be. He joins me today for this week’s edition of my Deadline video series Behind the Lens to talk about this and so much more regarding both his directing and acting careers — the latter including a new film The Comeback Trail in which he stars opposite Robert De Niro, Morgan Freeman and Tommy Lee Jones. He is also in a new version of Cheaper By the Dozen for Disney, and will soon direct a new feature film starring Florence Pugh (who also happens to be his girlfriend) for MGM.

Braff talks about his acclaimed first big splash in the independent film arena, 2004’s Garden State, which won him an Independent Film Spirit Award among others including, wait for it, a Grammy — he talks about the experience of actually beating Quentin Tarantino in that soundtrack music category. He also is reliving every episode of Scrubs these days with a new podcast, “Fake Doctors, Real Friends,” featuring memories shared with Donald Faison, his co-star from that show and BFF.

To check out our conversation and go behind the lens with Zach Braff, click on the video above.

Check out a new episode of Behind the Lens every Friday during Emmy season.