Continue to Deadline SKIP AD
You will be redirected back to your article in seconds
Skip to main content
June 19, 2020 5:21pm
1Comments 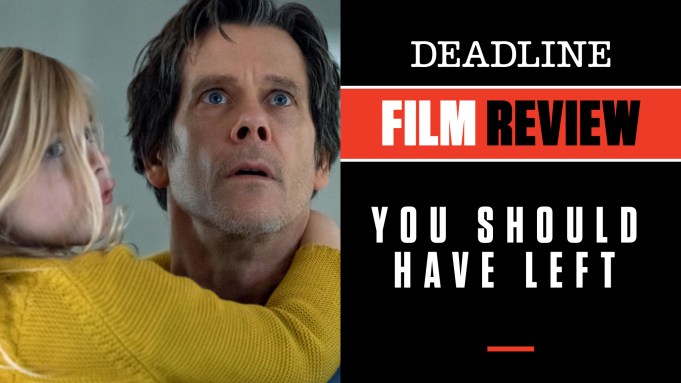 The newest from Blumhouse, specialists in horror and all sorts of creepiness, is yet another haunted house tale, You Should Have Left. This belongs to a genre that has been done repeatedly just about since Hollywood started churning out movies. Certainly not as busy or special effects-laden as the likes of The Amityville Horror or Poltergeist and their various sequels and reboots,  this one written and directed by veteran David Koepp is more cerebral and likely to be compared to The Shining more than anything else. It can’t hold a dripping candle to that Stephen King-Stanley Kubrick classic, but appearing on video on demand this week it is definitely a cut above the norm in the genre that frequently pops up on VOD instead of justifying the marketing budget for a theatrical release.

Of course this one is another example of Universal largely skipping theaters due to the pandemic shutdown, because otherwise with a cast that includes A-list names like Kevin Bacon and Amanda Seyfried this would probably have a modest run in multiplexes. It actually isn’t really a horror film at all, but rather another in a long line of psychological suspense thrillers with all the tropes we have come to expect. Koepp, who has written for some of the movies’ top franchises including Jurassic Park, Indiana Jones and Mission: Impossible, has a more modest track record as a director with films like the somewhat similar 1999 horror movie Stir of Echoes which also starred Bacon, as well as the highly entertaining Johnny Depp starrer, 2004’s Secret Window, which has the whole idea of a man stuck in a remote house in common with this one. This is the director’s first outing behind the camera since 2015’s critically un-acclaimed bomb Mortdecai, also with Depp in a comedy that was completely misunderstood if you ask me. I really liked it. (Yes, I was the one.) Thus it isn’t a surprise to see Koepp returning to the safer harbor of the familiar kind of movie that offers a few chills but takes no risks, which pretty much describes You Should Have Left.

Bacon plays Theo, a rich banker now remarried after his wife has seemingly committed suicide, though it was a well-publicized, shady death for which he stood trial and was acquitted. It still haunts him as we see in frequent dream sequences and flashbacks. His new wife, Susanna (Seyfried), is much younger, an actress currently making a movie in which she performs in a sex scene we hear but don’t see as Theo attempts to get by the officious production assistant on the set. Since her new film is set in England, he suggests they take a vacation with their 6-year-old daughter Ella (Avery Essex), and so off they go to a rented and secluded, modern-looking home in Wales.

It doesn’t take long for creepy things to start happening, and all three of them to experience horrendous nightmares that allow Koepp to turn up the volume occasionally on a rather static thriller. There of course are the quick murky appearances of an ill-defined boogeyman, thought to be the place’s mysterious owner named Stetler — or not. We aren’t sure what is happening but soon, ala Shining, Theo is being shuffled down dark and scary hallways that miraculously appear.  As the 90-ish minutes drag on, so does the haunting of this man who is being consumed, at least in his head, by this house and its frightening past. The new marriage is going downhill, and the kid is building enough trauma in her young life to cash in on decades of therapy no doubt when she grows up.

Look folks. It is all silly stuff, and we have seen it all before, but Bacon is such a skilled actor he actually so draws you into his own house of horrors inside his head that it becomes bearable. He believes it , so we go along for the ride even if it is on the dull side for too much of the time. Seyfried is fine, so is Essex. The production values don’t jump out at you, but Koepp knows how to build up the sound design when it counts. I had a better time with Secret Window, and I might recommend seeking that out for the time being and wait for the $20 price to go down on this rental. It will very quickly. Bacon makes it worth a watch, however, down the line.

Producers are Jason Blum, Dean O’Toole and Bacon. Check out my video review above with scenes from the film. Do you plan to see You Should Have Left? Let us know what you think.