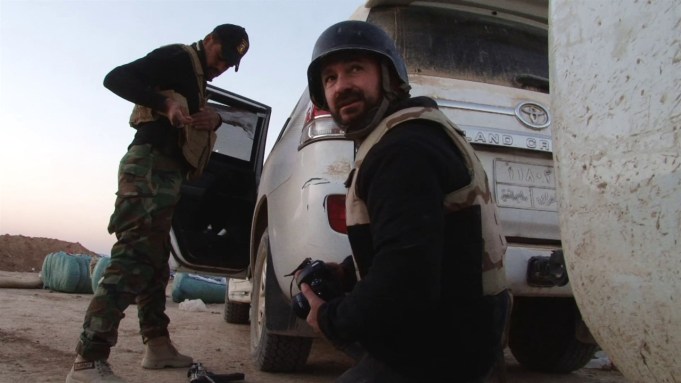 EXCLUSIVE: Brazilian production and distribution outfit Elo Company has unveiled a first look at their new documentary feature You Are Not A Soldier, which will have its world premiere at Hot Docs this week.

Director Maria Carolina Telles’ film dives into the story of award-winning war photographer André Liohn. Liohn is a man who struggles with his own internal grief, often choosing to immerse himself in some of the world’s most notorious conflict zones. Highly decorated for his work, including the prestigious Robert Capa Gold Medal, his life takes a drastic turn shortly after the death of his colleagues Marie Colvin, James Foley, Tim Hetherington and Chris Hondros. Having witnessed immeasurable suffering and fear, he begins to question his motives for placing himself in such danger and examines the disturbing but fine line between the life and death he has witnessed and to what end he will go to reveal those truths.

“You Are Not A Soldier is an ode to survival and love. It is my anti-war sigh,” said director Maria Carolina Telles. “The film is also a way of talking about overcoming grief.”

Aleksei Abib, co-director and screenwriter, added: “This is a story of a father and daughter’s relationship. A resurrecting secret in the desert of life.”

The Sao Paolo-based company’s development slate includes an adaptation of novel Céu Sem Estrelas (Sky With No Stars) by Iris Figueiredo, and Seaside Avenue, which will be directed by Maju de Paiva and co-produced with Viralata Films. Brazilian channel Telecine TV Channel is also aboard the latter.