Continue to Deadline SKIP AD
You will be redirected back to your article in seconds
Skip to main content
June 26, 2019 4:01pm 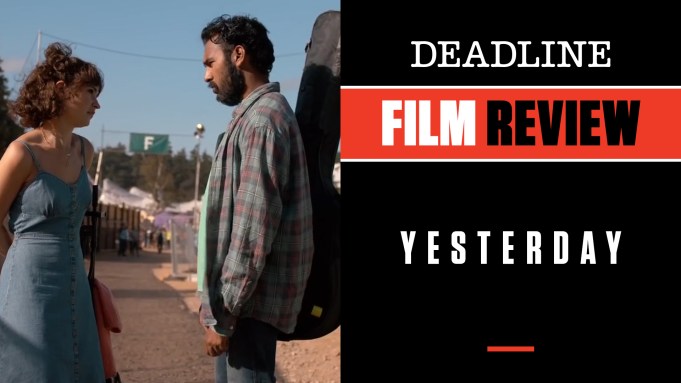 Well over a half-century after they landed in America and hit the stage on The Ed Sullivan Show, The Beatles are still the real deal. Yesterday is proof. The new film, a teaming of Oscar-winning director Danny Boyle (Slumdog Millionaire, Trainspotting) and screenwriter Richard Curtis (Notting Hill, Four Weddings and a Funeral, Love Actually), is a love letter to John, Paul, Ringo and George in a way that hasn’t been explored on film before.

Take the simple premise cooked up by Jack Barta, who gets a story-by credit: What if you woke up in a world where only you had ever heard of The Beatles or any of their songs? That is what Yesterday, an enormously entertaining movie that ultimately tells us what we already knew, that “all you need is love, love, love.” Considering Curtis’ cinematic ouevre and obsession with movie romance, this is not surprising, but the collaboration with Boyle, a much grittier filmmaker, is. Do oil and water mix? In this case the answer is an affirmative and enthusiastic yes. If this feel-good summer sleeper isn’t a roaring box office word-of-mouth success, I don’t know anything.

Plotwise, Jack (Himish Patel) lives in Suffolk, England and aspires to be a singer-songwriter, playing his inconsequential compositions around town, managed in his small-time pursuits by BFF Ellie (Lily James) and dreaming of more. One night a freak electrical blackout briefly hits, but it is enough to cause Jack to be hit by a bus, landing him unconscious, with two front teeth knocked out, in a hospital bed. When he finally awakens, life seems the same as it was until he slowly discovers he is in a world where The Beatles apparently never existed. Once he settles into this reality, he becomes obsessed in remembering all their songs and passing them off as his own.

Soon he becomes a phenomenon, going viral, and even is caught on a local TV show by famous Suffolk resident Ed Sheeran, who invites him to open for him at a Moscow concert — where Jack writes “Back In the USSR” on the plane ride there (!). He is introduced to Sheeran’s agent, Debra (Kate McKinnon), who sees a major star, or “product” as she calls him, and before long Jack is in Hollywood recording an album, joined on the trip by goofy friend and now “roadie” Rocky (Joel Fry).

Meanwhile a loooooong-simmering relationship with Ellie stalls as she is left behind for his newfound fame. Will they ever get together? Will the fraud only he knows about ever be revealed? Where does the guilt of becoming a star with someone else’s music take over? These are all questions that come up along the way, along with a joyous soundtrack of Beatles classics expertly reimagined for the film and sung beautifully by Patel — best known for British series EastEnders but likely to have a much bigger following after this musical fantasy, which rewrites the premise of It’s a Wonderful Life surmising what the world would be like if The Beatles never existed, and how introducing their timeless music into it plays 55 years later. Can one man save the world with Beatles tunes?

Boyle is blessed to have a perfect cast bring the crazy story to life, most notably Patel who proves he not only can act but can also sing (all the songs are done live rather than pre-recorded), bringing new life to a musical catalog second to none. James is lovely in the role of a local schoolteacher, moonlighting as a manager for the pop hopeful on whom she actually has had a lifelong crush all along.  Sheeran pulls off the neat trick of playing himself in a nice supporting role that proves he is not a one-trick pony. McKinnon’s role is the most broadly written, but for me she delivers some wicked lines with perfect comic timing — even if we don’t forget SNL watching her go through the paces. James Corden, like Sheeran, is playing himself in a brief cameo as part of a nightmare Jack has  that presents what might happen if he were to be found out.

There are many musical moments that are just sublime, including my favorite where Sheeran proposes a pop-up songwriting contest between Jack and him with just a few minutes to compose a tune. Sheeran’s is perfectly serviceable. Jack on the other hand writes “The Long and Winding Road” on the spot. A bit where he records “Hey Jude” is very funny as Sheeran offers professional advice to get rid of the title and call it “Hey Dude” instead. British and Hollywood locations are nicely used, with a special interlude in Liverpool where Jack goes for inspiration as the ruse continues. One encounter Jack has towards the end is unexpected and very poignant, but I will say no more.

I don’t know what this movie summer full of sequels and the usual warm-weather fare would be like without an original charmer coming along like this one, but all I can say is I believe in Yesterday. This is a movie that sends you out of the theater on the happiest of highs, and that is a very good thing in a world that fortunately does have The Beatles. Queen and Elton John can move over.

Check out my video review above which also has scenes from the film. Do you plan to see Yesterday? Let us know what you think.