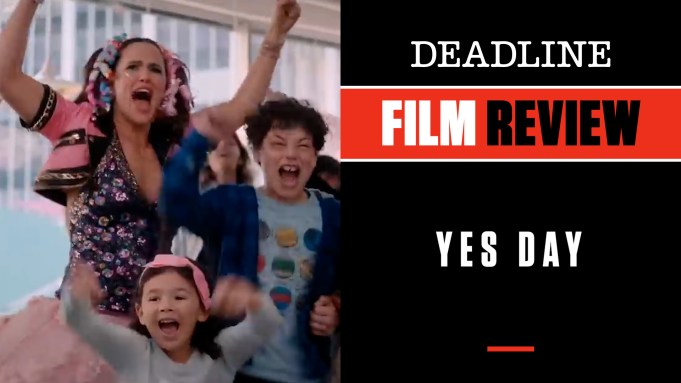 Watching the new Netflix comedy Yes Day, I got the feeling I was trapped on some kind of strange planet where only kids and their parents were allowed, running rampant without restraint, and from which there was no escape for visitors not a part of the “game.” Or, more accurately, I thought I had wandered into a packed Chuck E. Cheese where all the doors were then locked and someone threw away the key.

Fortunately this is a movie that has Jennifer Garner going for it, an immensely likable and welcome screen presence who does her best to ground it in some sort of reality. No easy task here for her, or co-star Edgar Ramirez, as they put on their best Lucy and Ricky Ricardo act and try desperately for laughs where describing their high jinks as “frenetic” might be too much of an understatement.

Based on the children’s book by Amy Krouse Rosenthal and Tom Lichtenheld, this is a plot wrapped in a childlike fantasy premise that if your kids are well-behaved enough, then parents will grant them a so-called “yes day” — 24 hours during which their every wish is granted and the word “no” is forbidden. Well, with restrictions that is. They aren’t allowed to kill the neighbors, and getting a dog is out of the question because that would be something for the “future,” not the day itself. But to go by the slapstick shenanigans on display here, virtually destroying the family home and car in the process of saying “yes” is not a problem at all. It is that kind of movie, folks, but one that should be slapped with a warning label to parents who fall for this game.

Garner is Allison, a former skydiving/rock-climbing free spirit but now beleaguered mother of three, tasked basically with being the bad guy, always shutting down her kids with a constant “no.” Ramirez is Carlos (far from his namesake in the brilliant Olivier Assayas movie), a work-obsessed hubby who gets to be the nice guy of the parental team. When a teacher suggests maybe they try a “yes day” to counter problems with controlling their kids (middle son Nando tends to compare mom to Russian dictators), they actually agree, probably not a great idea.

Fourteen-year-old Katie (Jenna Ortega) is at a difficult age, a bit boy crazy and wanting to go to the Fleek Fest concert without parental supervision, something mom is only allowing if she accompanies her because Katie and her BFF’s mission is really to “hook up” with two older guys. Nando (Julian Lerner) is obsessed with school science experiments and wants to throw a massive house party for nerds in order to try many of them out. The youngest, Ellie (Everly Carganilla), is sweet and just adds to all the fun. And what fun it is when Yes Day finally arrives, complete with a five-point checklist Nando has prepared. It is off to the races, starting out innocently with a garish makeover of Mom and Dad, followed by an outing to the ice cream store for a massive family pile-on into consuming a giant joint ice cream sundae in record time. Then how about driving through a car wash with the windows down as the family gets blasted with soap and water streaming in and destroying the interior of their automobile? Still having fun?

How about an Afghanistan-style war game with teams hurling water balloons at each other for what seems like an eternity, and ending with a relentless large bird attack on Dad that even Tippi Hedren might fear. No “yes day” would be complete without a visit to Magic Mountain (ambulance driver Fortune Feimster gets them there in record time — don’t ask), where, among other things, Mom gets into an all-out jihad with another woman in order to win a giant pink stuffed gorilla, a rivalry that turns physical and sends both of them and the intervening Carlos to jail.

That leaves the three kids loose in the police station to convince a clueless desk deputy (Arturo Castro) that their (non-existent) grandpa is waiting outside with the car running. Actually, that would be Katie’s BFF, ready to head out with her to the forbidden concert — but not before dropping the other two kids at home, where Nando’s dream nerd party gets into full swing, including one errant experiment that sends pink soap bubbles flooding the entire home in a scene that should make every parent cringe. Meanwhile, out of jail, Carlos heads home to find the kids while Allison sets off for the concert to stop Katie before it is too late. This leads improbably to Mom actually getting permission from performer H.E.R. to take the stage as a warm-up act in order to locate her daughter, giving Garner the chance to cover the ’60s pop hit, “Baby, I Need Your Loving” in what actually turns out to be the film’s best sequence.

Yes Day is meant to be family fun by watching another family have fun. Director Miguel Arteta doesn’t employ much subtlety in doing so, or even toning down the over-stuffed action of Justin Malen’s script, but kids are gonna laugh and forget the pandemic for 90 minutes, so that’s probably all you can ask. Garner is also a producer in addition to Ben Everhard, Nicole King, Daniel Rappaport and Lawrence Grey. Netflix begins streaming it on Friday. Check out my video review with scenes from the movie at the link above.

Do you plan to see Yes Day? Let us know what you think.