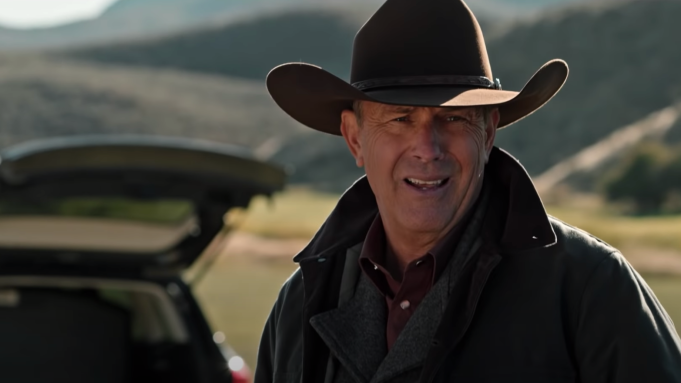 SPOILER ALERT: Who shot John Dutton? That’s the question for impatient Yellowstone fans after the most compelling Season 3 cliffhanger since, maybe, Dallas?

The first full trailer for season 4 of Taylor Sheridan’s hit Paramount Network series offers a lot more detail than the 30-second teaser that lit up the internet two weeks ago.

For one thing, we see Cole Hauser’s Rip Wheeler approach Kevin Costner’s bloodied Dutton saying, “Don’t you die on me.” (Costner’s character was shot and left on a lonely stretch of road at the end of season 3.)

So whodunnit? Like TV’s most famous cliffhanger 41 years ago, it could be just about anyone.

We get a lot of voiceover from the murderous Garrett (Will Patton), who’s the biological father of Dutton’s black sheep son Jamie (Wes Bentley). Garrett, who last season urged Jamie to (figuratively, at least) stab his adopted father in the back says, “Fair, moral: Those are words men invented to scare and shame other men from taking back what they’d stolen.” “What about right or wrong?” asks Jamie. “There’s no such thing,” replies Garrett.

We also get shots of John Dutton’s rivals Roarke (Josh Holloway), Chief Rainwater (Gil Birmingham) before the words “Every Body Pays” flash across the screen.

And we didn’t even mention the hints about the fate of Dutton’s daughter Beth (Kelly Reilly), whose office was firebombed, or his son Kayce (Luke Grimes), last seen overturning his desk and returning fire as gunmen entered his office or Jimmy, whose unconscious after falling off his horse.

Watch the trailer above to see it all.