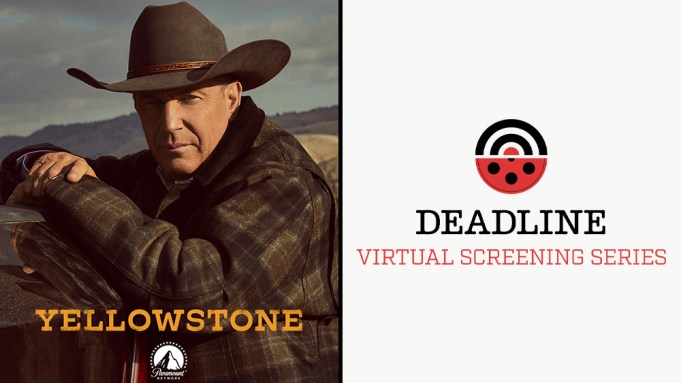 Kevin Costner wasn’t intending to be headlining a regular continuing TV series when he signed on to star as John Dutton, the complex man who controls the largest ranch in America, in the Paramount Network series Yellowstone, which returns for its third season Sunday. He says he was told it was just one limited season.

“I had a decision to make because it wasn’t how it was pitched to me, and I thought, well, I could bail on this. I had a real moment, and everybody out there has them too, where you go ‘Oh’ — you thought you were doing one thing, and now I might be staring at something else,” Costner said during a Q&A following a screening of the Season 2 finale for the Deadline Virtual Screening Series.

“I had my own personal reasons why I decided to do it, and that doesn’t have to be shared on a mass level, but I did, and I have tried really hard,” he added. “There’s no difference between a movie and this for me.”

The two-time Oscar-winning star-director-producer whose films have included 1990 Best Picture winner Dances With Wolves, The Untouchables, JFK, Field of Dreams, Bull Durham and countless others connected with the open-sky Montana setting of the contemporary Western series there in the great outdoors. He says it fits him better because, despite several courtroom dramas in which he wears a suit, he thinks he doesn’t look good dressed up, and ever since he was a kid does not enjoy wearing ties.

“So consequently, even when I wore Giorgio Armani in The Untouchables, I never felt like I looked good in suits. I felt like they got me in trouble, and you know, it just goes to show the things you carry forward in your life. You know, my wife is going, now, ‘You look fine’, and I go, ‘No, I don’t’. These other guys look good in suits, I don’t,”  he said. “There’s something about being out in nature, being on a horse, looking at the country in a moment when it was almost a Garden of Eden, when there was nothing there, and that’s what we have in Yellowstone. “

The show has used both Utah and Montana locations but now is almost going exclusively to Montana and the Bitterroot Valley, which is exactly where Lewis and Clark went through. For Costner, it is location, location, location and, of course, some killer scripts written by series creator and frequent director Taylor Sheridan (Hell Or High Water, Wind River, Sicario), whom Costner praises.

“When you combine a really active, lively script the way Taylor has against this kind of background, you have the potential for magic because you never get tired of looking at these backgrounds and understanding this life that is actually still being carried out every day in America,” Costner said. “We still round up cattle on horseback in America, people maybe don’t know that’s the truth, but it is, all over. Every state is probably pretty much raising cattle, and that work is still done. You know, he’s heightened the drama, obviously, but I think it’s a matter of the visuals and the writing being pretty compelling.”

Costner, has appeared in, and in some cases also directed, numerous period Westerns (Silverado, Dances With Wolves, Wyatt Earp, Open Range) so he knows the genre well and what makes it work. He is also an executive producer Yellowstone, but has made the conscious decision not to direct any of the episodes. It’s the role of Dutton that is most important to him here.

“He’s a mixed bag. He’s a fifth generation rancher who is not able to arbitrate the problems the way his grandfather and great-grandfather did. He’s living in modern times, but that doesn’t stop Taylor. You know, I’m still waging war out there and always the issue is over the land, be it the politicians, be it the environmentalists, or be it the Native American issues that also try to balance out this show. I don’t go looking for a fight, but he doesn’t back away from any, so it’s high melodrama, we know what it is, but Taylor has managed to make it very volatile and very exciting,” Costner says of the character and show as it heads into a third season (it already has been renewed for a fourth).

The show was an immediate ratings hit for the renamed Paramount Network, the No. 1 summer cable program for the past two years.  he ensemble cast is impressive and includes Luke Grimes, Wes Bentley, Kelly Reilly, Cole Hauser, Gil Birmingham and Kelsey Asbille. Actors like Danny Huston and Neal McDonough have recurred in the large cast as well, and Costner loved working with them.

One of the things he says he uses to “crawl into the part” is the creation of a new album, “Tales From Yellowstone,” available Friday, a concept record like the one he did for Hatfields & McCoys, the History Channel limited series that won him a leading actor Emmy (he’s in contention again for this series in the Lead Actor in a Drama Series category). “It had instrumentals that define the mood, and my band and myself, and three or four of the melodies have found their way into the soundtrack in Yellowstone…You’ll get a little bit of insight into how I think about my work,” he said, giving several examples of songs that help him define what he’s doing here.

Revisiting the same character each season has been a new experience for Costner, who is the rare major film star who doesn’t do sequels despite a boatload of hit movies and offers to repeat them. “With my movies, everybody is saying, why don’t you make a second Bull Durham, why don’t you make a second Dances With Wolves, and I was like, oh, I don’t know. I guess I’ve been frustrating people for a long time because when you make the second and third version of a movie, all you’re doing is backing the truck up and telling people how big a shovel you want to load up on the money, because it’s just about money, and I’ve kind of always loved, just, well, I made that movie. I don’t need to make that one again. But I’ll be making a Western in the future for myself, but in this instance, I think Taylor is really mixing it up and that makes it easier for me,” he says of slipping back into John Dutton’s shoes.

Costner adds he is not against sequels, but the writing has to be up to the level of the first, and that doesn’t happen often. Interestingly, he says the movie he came closer to revisiting was Mr. Brooks, where there could have been two more ways in. But as it happened they never made them.

How long he will continue to do Yellowstone is anyone’s guess. He definitely sees some of the opportunities for streaming a plus (his movie with Woody Harrelson, The Highwaymen, was for Netflix), saying they can actually be more edgy than movies now in a sense because stories aren’t restricted by a two-hour running time as a rule. As for theatrical films, there’s a Focus Features movie with Diane Lane called Let Him Go, but what he really wants to do is direct some more for the big screen.

“I think I’d like to play the second half of my career out directing more,” he says. “So I think that’s what I’ll do, and you know, I have three or four things that I know I’m going to do in the future, so they’re kind of big, high adventure movies when guys were still solving things with their fists.”

Watch some of our Virtual Screening Series interview above.