Continue to Deadline SKIP AD
You will be redirected back to your article in seconds
Skip to main content
June 16, 2018 1:47pm 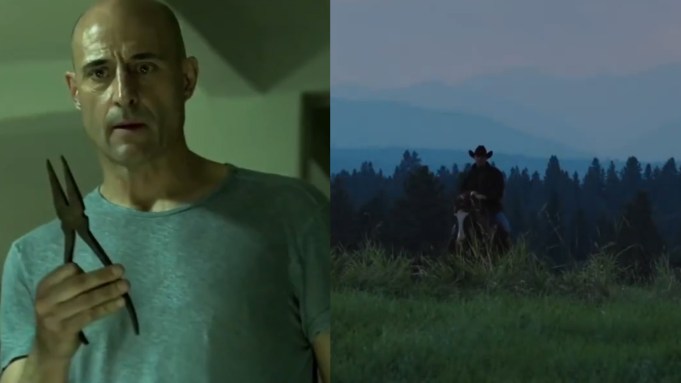 It’s not that Deep State and Yellowstone are bad, but rather that the Mark Strong and Kevin Costner starring series are just another set of shows full of nothing new. Even, with such stars and big budgets reflected on-screen, the Epix and Paramount Network offerings oddly don’t have much power

Having already debuted in the UK and renewed for a second season, the June 17 premiering spy thriller series with the Kingsman alum has all the scheming, deceit, death, Iranian nukes and low grade torture of any old season of Homeland. However, Deep State also has none of the compelling narrative of the Claire Danes led show, as I say in my video review above. For one thing, as Strong’s Max Easton is forced out of idyllic retirement, pulled into Middle East chaos and compelled to confront elements and offspring from his past by his old bosses, there are way too many plot holes large enough for any maniac to drive a truck load of explosives through here.

Worst of all, co-created, directed and written by Rogue’s Matthew Parkhill, the first eight-episode season of Deep State underserves the strengths of its lead – and why would the Fox Networks Group Europe & Africa produced show do that when you have the likes of a Mark Strong to flex his considerable stuff?

On the other side of the Atlantic, the beautifully shot Taylor Sheridan created 10-part Yellowstone that debuts on June 20 on what was once Spike TV about the battles of mega-rancher Dutton family, often feels like it is sending Oscar winner Costner and viewers round in circles.

Essentially a battle over Montana land from developers, native Americans, politicians, blended family and everyone for what is described as the largest contiguous cattle ranch in the country, Yellowstone paints Costner’s John Dutton as a man who’ll do whatever he’ll have to do to protect what’s his. Unfortunately, despite those tried and true stakes, the tired and muddled way the series executes its intentions makes it hard to keep your eye on the horizon. Aiming for iconic modern Western status, with a star that lives and breathes that stuff, Yellowstone ends up being more of a poor man’s Dallas with few bubbles in the soap, if you know what I mean?

Click on my video review of Deep State and Yellowstone above to see more of what I think of the two series. Will you be watching either of them? Tell us why.