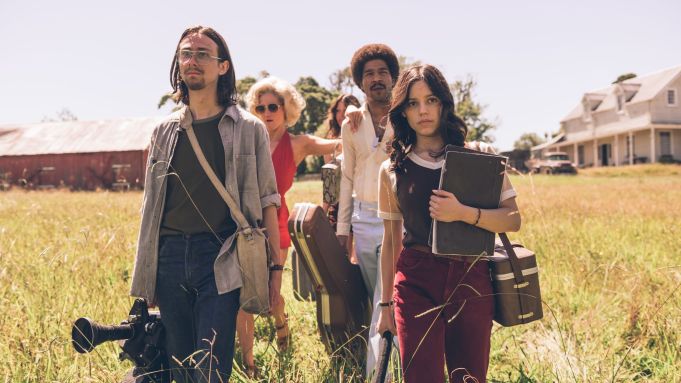 Ti West (The Innkeepers) and A24’s horror film X is a cross between the Texas Chainsaw Massacre and Boogie Nights. West wrote and directed the pic with Jacob Jaffke, Kevin Turen, Sam Levinson and Ashley Levinson producing through their Little Lamb Productions. Scott Mescudi also serves as an executive producer.

X stars Mia Goth and Mescudi, Jenna Ortega and Brittany Snow. The film follows a group of young filmmakers set out to make an adult film in rural Texas, but when their reclusive, elderly hosts catch them in the act, the cast find themselves fighting for their lives.

Snow, Mark Henderson and West stopped by Deadline’s SXSW Studio to discuss how X came to be.

West says he was looking to make something different from his previous works. “I made a lot of horror movies — about seven in a row. Then I took a bit of a break because I didn’t want to repeat myself, but I had never made a slasher. Slasher movies I would say — the worst description of them would be sex and violence. I started thinking about what I could do with sex and violence that would be a little bit more high-brow.”

When the announcement of the film and its cast hit, fans were genuinely shocked to find out Snow was apart of the project. Most know her as Chloe Beale from Pitch Perfect, so to see her in something so explicit was a stark contrast.

“I think the normal tropes of having the woman character do this, or have her die fast right away because she has sex, we were subverting that,” she said. “As a woman you don’t want to feel like your character is being used as a plot device. So it was really nice to read a script where the characters have their own particular goals.”