As Packaging Comes To An End Today, Squabbles Over Grandfathered Projects Likely To Continue; Analysis + WGA Q&A
Read the full story
May 6, 2021 3:00pm 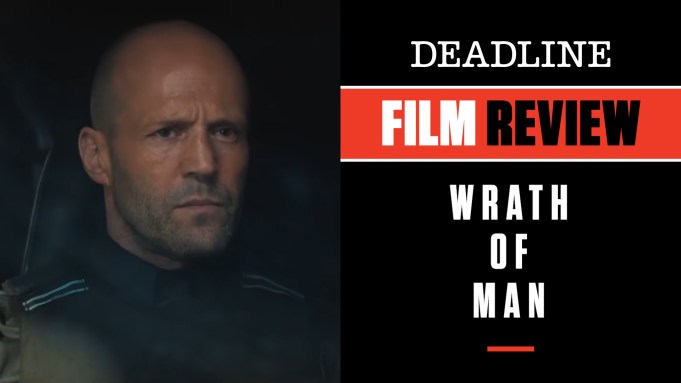 Over the decades Hollywood has found the armored truck heist genre irresistible, so it isn’t so odd that Jason Statham and director Guy Ritchie would center Wrath of Man, their first screen teaming since 2005’s Revolver, around the idea. A supposedly bulletproof vehicle loaded with cash is an easy target for a testosterone-driven story with seething and greedy macho characters — one set on revenge and all vying to be the last man standing.

Both Ritchie as a filmmaker and Statham as an actor found early success together in the amusing and acclaimed British gangster films Snatch and Lock Stock and Two Smoking Barrels a couple of decades ago. Those brawny comic flicks were fun and amusing, with offbeat characters at their core. Since then, Statham has become a reliable leading man in action — quick with a quip but mostly showing off muscular bona fides in brutally violent vehicles. Ritchie has been hit and miss with a number of high-profile studio franchises such as the Sherlock Holmes films, the horrendous King Arthur and the ill-fated Man From U.N.C.L.E. big-screen reboot, or going against type helming Disney’s live-action Aladdin. His style can sometimes be annoyingly frenetic and busy, but with Wrath of Man the dark and serious tone of an armored car heist plot serves both him and Statham well and gives them a license to kill in effective, high-octane power mode. It’s highly entertaining for fans of both director and star.

Set in Los Angeles but shot mainly with London doubling for the city, Ritchie and his gaggle of screenwriters have taken the 2004 french hit Le Convoyeur and given it an Americanized spin while providing Statham the kind of quiet, clenched-teeth role that fits him like a glove. He plays Patrick Hill, aka “H” as we later learn, a quiet but lethal guy who gets a job working as a security driver for a cash truck company named Fortico. Showing him the ropes, his veteran new colleague Bullet (Holt McCallany) teams with him but is surprised and a bit suspicious when, after the pair are robbed on a run, Hill disposes of the six baddies with such clear and vicious precision that everyone in the company begins to wonder just who this guy is and where he came from. That includes the manager (Eddie Marsan), who proposes to move him out of the field and into a desk job, so freaked he is by what Hill has done. The big boss, however, loves the publicity and sees Hill as manna from heaven for Fortico’s PR image after a series of robberies have damaged the company’s reputation.

Using time-shifting storytelling devices we soon learn that Hill is indeed not just a guy in need of a low-level security job, but actually an undercover crime boss out to avenge the death of his son at the hands of a group of ex-military guys who quite frankly don’t know what they are in for once “H” zeroes in on them. The connections become clearer as we meet these guys, all once buddies in Afghanistan but now experiencing hard economic times made easier by some small armored truck heists, facilitated by one of them on the inside at Fortico. Led by Jackson (Jeffrey Donovan), they initially aren’t looking to kill anyone, just make a decent living for their families. But then they get greedy and go for the final blow: an elaborate plan to rob the whole fleet at once and pocket about $150 million. Unfortunately, one of the brood, Jan (Scott Eastwood showing his dark side), has a hair-trigger temper and impulsively killed a young man during one of their jobs. Guess who that young man was?

Ritchie delivers a solid ultra-violent enterprise here and Statham, dark and shady and handy with guns, facilitates it for him. The supporting cast plays it for all its worth even if most of them are stock characters in this type of film. Donovan, Marsan and particularly McCallany are all very fine, and as “H’s” fellow drivers Josh Hartnett and certainly Niamh Algar — the only woman in the bunch — stand out. Andy Garcia is in for a couple of scenes as a mysterious “H” associate.

Check out my video review above with scenes from the film. Do you plan to see Wrath of Man? Let us know what you think.