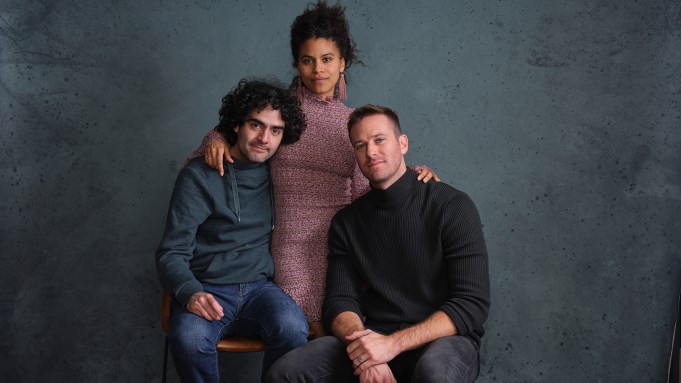 With his second film out of Sundance in the last few years, Babak Anvari had a lot to live up to. His first effort, 2016’s Under the Shadow, drew critical raves, winning a BAFTA Award, two British Independent Film Awards, and other accolades, and winding up as the British entry for Best Foreign Language Film that same year. This year, Anvari presents Wounds, centering on a New Orleans bartender (Armie Hammer) who begins to unravel, after he picks up a phone left behind at the establishment, and malevolence ensues.

For many directors, the enormous success of a first feature can be both a career boon and a substantial burden, engendering outsized expectations. But taking on his second genre film, Anvari felt only the kind of pressure he always feels. “I approach every project with a sense that I just have to try my best. I love challenges, so it didn’t really matter that it was my second film,” the director said of Wounds, sitting down at Deadline’s Sundance Studio with Hammer and co-star Zazie Beetz. “It was just basically, ‘I want to make a film that, if I’m watching as an audience member, I enjoy.’”

The director’s latest is adapted from a horror novella, Nathan Ballingrund’s The Visible Filth, and when Anvari read it, he was instantly drawn in, finding in this source material the potential for “a great companion film” to pair with his first. “Under the Shadow was about an ascent of a woman, and her journey to become a hero, and this one was about the descent of a man,” he explains. “The characters were so real, especially the main character. He had all the flaws and all the negative traits that you see in so many men these days, and his journey and his unraveling was really interesting to me.”

For both Hammer and Beetz, the idea of starring in Wounds was a no-brainer; both were familiar with Under the Shadow, and respected Anvari’s storytelling command. “I really trusted Babak’s vision and ability to make something cinematic and beautiful and interesting,” Beetz says.

For Hammer, an artist that hates scary movies, Under the Shadow still resonated powerfully, which was the clearest sign to him that the work and the artist at hand was superb. Meditating on the human condition in concert with Anvari, Hammer found the film’s message to be quite clear. “If you are an empty vessel and you don’t have any principles, and you’re just a vacuous, hollow person, if you’re not careful, it’s really easy to get filled with whatever is around you,” the actor says. “In this case, that takes a really dark and ominous turn. It’s a great descent into madness for this character.”

To hear more about Wounds—which is, in Anvari’s words, “a relationship drama that slowly turns into a nightmare”—take a look above.