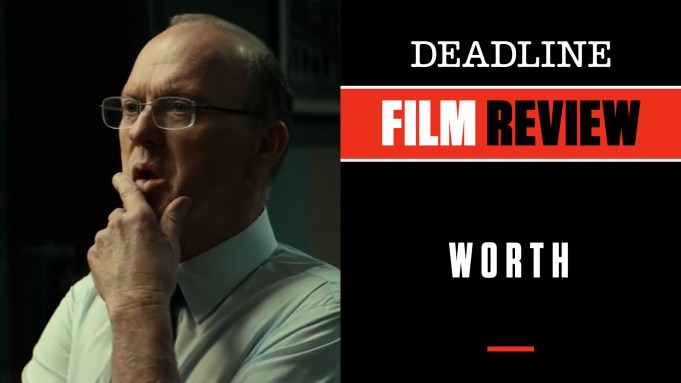 It has taken more than a year and a half after its January 2020 Sundance Film Festival debut for the compelling true story of the battle for the September 11th Victim Compensation Fund to finally be released. It just may be that Netflix, which picked up the film there, was waiting for the 20th anniversary of the attacks to make this even more timely. Regardless, it is well worth that wait. With Michael Keaton delivering one of his finest performances (he is also a producer on it) and a stellar cast including Stanley Tucci, Amy Ryan and an awards-worthy turn from Broadway star Laura Benanti, I found this to be an enlightening and enriching experience that takes what sounds like a bureaucratic procedural about the creation of a fund to pay back families for loved ones lost in that horrendous terrorist attack, and finds the humanity amid all that government paperwork.

Credit director Sara Colangelo and writer Max Borenstein (basing his screenplay on Ken Feinberg’s 2007 memoir) to literally find the heart at the center of the story. And to Keaton, who slowly and deliberately finds the sheer human dignity in a professional brought in to basically crunch numbers. How much is a life actually worth, the film ultimately asks.

Keaton plays Feinberg, a man who with his longtime associate Camille Biros (a terrific Ryan) has done this sort of work for other disasters, and actually continues to do it to this day. But in being brought in by the George W. Bush administration to create a fund that would fairly compensate the victims and first responders of 9/11 based on their salaries, net worth, families and other considerations, Feinberg walked into a powder keg of raw emotion and many roadblocks.

Speaking to a packed auditorium with the families of victims, Feinberg gets his first taste that assigning a dollar figure to help make up for the loss of someone you loved, especially in this case, would not be easy to sell. He soon learns he is being opposed by a formidable force in the person of a community organizer named Charles Wolf (a superb Tucci), who at first urges the unruly crowd to listen to Feinberg but then makes it clear he is representing and trusted by many people who feel everything is wrong with Feinberg’s approach and proposals. It becomes a bit of a cat-and-mouse game just between these two, but also Feinberg runs into serious trouble in his interactions with some of the family members themselves, notably a widow named Karen Donato (Benanti) and the unforgiving brother (Chris Tardio) of her late first responder firefighter husband. That case gets particularly thorny as things progress, but it also serves as a driving force for Feinberg to find his own humanity and realize you can’t put a price on any of this.

Getting the required numbers needed to trigger the fund in the roughly two-plus years he is given is an enormous and seemingly impossible mountain to climb, but this story will have you cheering like you are watching a Rocky movie. The fact that it makes you feel better to be a human being by its end is why for me it is one of the best pictures of 2021 (even if it actually was first seen at the start of 2020).

Keaton is understated and authentic throughout, something of an unexpected and quiet hero who just keeps plugging along no matter how dark the prospects of success become. Ryan superbly complements him, and Tucci, so good in everything, is especially fine as Wolf. All those characters are based directly on the real people involved in this true story, while the family members (including Benanti’s heartbreaking turn) and other victims are composites drawn from the actual stories Feinberg tells in his book. The names have been changed, but the actual facts all happened. That Borenstein was able to pack so much suspense into the telling of it all here, aided by expert direction from Colangelo, is something of a miracle itself. Worth is well worth your time.

Check out my video review above with scenes from the film. Do you plan to see Worth? Let us know what you think.