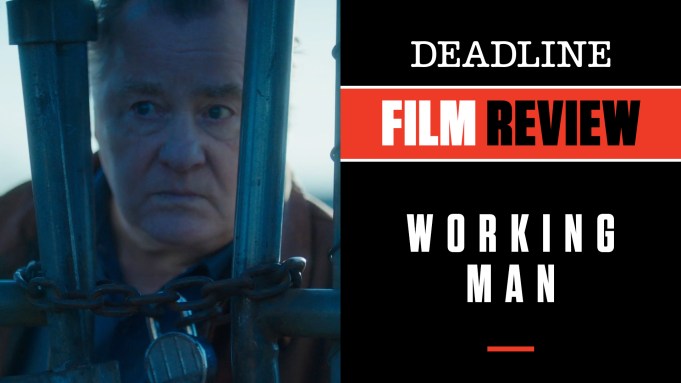 Certainly the new film Working Man wasn’t intended to be released at a time when unemployment is at or approaching its highest level since perhaps the Great Depression. With more than 33 million Americans newly out of work, factories continuing to close and other results of the coronavirus pandemic, this film takes on new urgency. But most importantl, it might inspire empathy toward those who are adding to these sad statistics on a daily basis by putting a human face on what is otherwise a number on a news report.

Allery Parkes (Peter Gerety) is an older worker at a plastics factory in a working-class Illinois town where just about everyone seems to be employed by the big companies — blue-collar lifers whose occupation is also who they are. It definitely is how Allery is defined, even as he is old enough to retire. When the factory shuts down and everyone loses their job, Allery doesn’t take it well; he begins returning every day, lunchbox and Thermos in tow, to the empty building where even the power is turned off. This confounds not only his former co-workers, who just watch as he marches through the neighborhood to the non-existent job, but also his devoted wife Iola (Talia Shire) who just can’t understand why he is doing this. Soon though he is joined by the uber-enthusiastic colleague Walter (Billy Brown) who not only takes charge but makes Allery’s quiet statement a crusade by also enlisting the rest of the workers to return to the building, sleeping bags with them, and stay there until they finish the job they had started as a way to guarantee they will be paid. Can they turn it all around? Well, it’s complicated, as Allery finds.

As things are revealed about Walter as well as why the factory really shut down, the situation begins to change things in a big way. In addition to all this, the poignant and pertinent script by writer-director Robert Jury hits a sad moment in Allery and Iola’s marriage as they still deal with the tragic death of their only son.

Jury’s film is reminiscent of the collective work of the great British director Ken Loach, whose cinematic career frequently has been directed at the plight of the working man in England. Now here’s an American director who has brought it much closer to home. This is a promising feature debut, to be sure.

For those going through the heartache of having your whole world suddenly turned upside down, take heart: This film is not a total downer and even offers hope. It is memorable in many ways, but first and foremost as a showcase for some fine actors who don’t get leads in movies these days. Gerety, a recognizable actor from many films and TV shows including as last season’s key villain in Ray Donovan, is simply superb, saying more with one facial expression than many actors can do with 20 pages of dialogue. Shire again proves what a fine actress she is, underplaying emotions buried inside, instead putting faith in her weekly Bible studies. Also just excellent is Brown (How to Get Away with Murder), how has perhaps the showier role and delivers on all cylinders. These are the three main actors, but there is terrific support all around in this film which defines what smart independent moviemaking is all about.

It would be powerful material to absorb at almost any time, but that we have it right now is particularly heartening and important.

Producers are Clark Peterson, Maya Emelle, Lovell Holder, and Jury. Released through Brainstorm Media It is currently available on VOD and digital platforms. Check out my video review with scenes from the movie at the link above.

Do you plan to see Working Man? Let us know what you think.