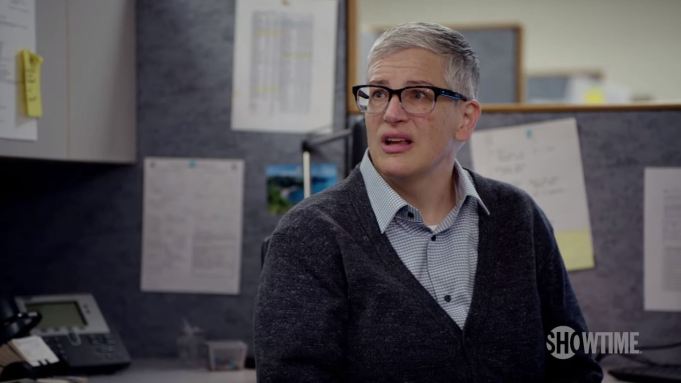 Sounds pretty heavy, right? Well, unfortunately those words were the last that Abby’s analyst would hear. “You did not kill your therapist,” a friend assures her. “Ummm, I’m pretty sure I did,” is the reply.

Here is the first trailer for Work in Progress, Showtime new comedy series whose pilot premiered at Sundance in January. Abby McEnany stars as Abby, a 45-year-old self-identified fat, queer dyke from Chicago whose misfortune and despair unexpectedly lead her to a vibrantly transformative relationship.

Karin Anglin and Celeste Pechous co-star along with SNL alum Julia Sweeney in a key role as herself. Theo Germain guest stars in the comedy created by Chicago improv mainstays McEnany and Tim Mason and co-written by Lilly Wachowski — all of whom also executive produce and serve as showrunners.

Lawrence Mattis, Ashley Berns and Josh Adler of Circle of Confusion also serve as EPs along with Tony Hernandez of JAX Media and Sweeney. The series premieres December 8 on Showtime.

Have a look at the trailer above and the newly released key art below, and tell us what you think.