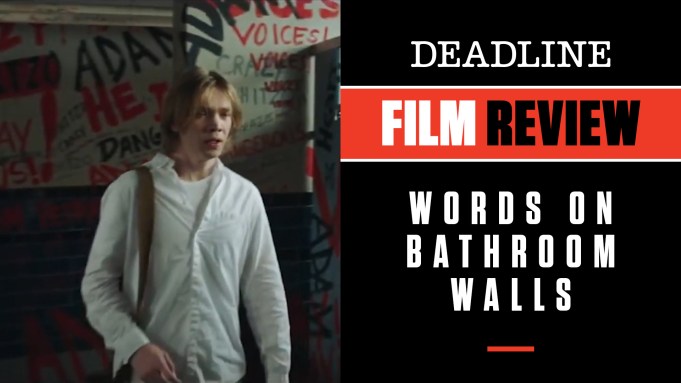 Having sat through dozens of movies since the pandemic lockdown began in March, movies headed to either VOD or streamers or a handful of drive-ins, they sometimes just become interchangeable. However, when you see a performance so strong, so moving, so expertly crafted like Charlie Plummer’s is in Words on Bathroom Walls, you just want to get off the couch and stand up and cheer. Plummer is simply superb playing a high school senior battling demons caused by severe schizophrenia, and he carries this adaptation of Julia Walton’s YA novel so skillfully and authentically that I have to say it is so far perhaps the most moving piece of acting I have seen to this point in what is admittedly a year for movies like no other.

With direction by Thor Freudenthal and a screenplay from Nick Naveda, this riveting drama about teens — but not a “teen film” — sneaks up on you in surprising ways. It centers on Adam (Plummer), who in voice-over narrates his own story just as happened in the book. He suffers from schizophrenia, constantly hearing other voices and battling demons while trying to keep his secret and eventually pursue his dream of being a chef. First, he has to find a way to still get through his senior year of high school. That becomes infinitely harder when he has an extreme episode in a chemistry class that turns frighteningly horrific in his head and causes real-life injury to another student. He is expelled, diagnosed with schizophrenia, and his only option becomes a Catholic school willing to take him in as long as he stays on his meds.

The filmmakers use, probably overuse, visual devices to put the audience in Adam’s head. That chemistry class incident thus is presented like a chaotic nightmare of destruction. An interview with the principal of the new school, Sister Catherine (a fine Beth Grant), turns into a special effects sequence as he envisions her and everything around her on fire. He also is surrounded by other figures created in his head with whom he is having conversations. There’s the good in the form of AnnaSophia Robb, the skanky bad influence from Devon Bostick, and a bodyguard (Lobo Sebastian) lurking in the background. We see all of them as they pop in and out, but after a while the device becomes a bit distracting. Fortunately they begin to fade as the movie hits a higher gear, most notably when another important figure, Maya (Taylor Russell), the new school’s valedictorian, turns up for chats in the restroom — which is where the words in the film’s title come into play. She offers hope, first becoming a tutor and then a romantic interest. Although it’s a nice respite for Andy, the demons return, he goes off his meds, and is once again persona non grata. Nevertheless he struggles to keep his date with Maya for the prom, an outing that turns disastrous as the movie thoughtfully navigates this young man’s struggles in convincing manner.

What is really impressive, and particularly distinctive for a so-called Hollywood adaptation, is that the filmmakers never go for easy sentiment or tropes of the genre (and we have seen schizophrenia play out in countless films in different ways). A scene where Adam faces the student body and comes clean about his inner angst and secrets is heartbreakingly real and completely unpredictable for those expecting it to go in a certain way. This film is much too smart for that, but I have to say I was startled that it didn’t follow the well-trodden path.

In addition to Plummer’s stunning work, Russell continues to show the promise she exhibited so memorably in last year’s sadly underseen Waves. Molly Parker as Adam’s compassionate but frustrated mother, and especially Walton Goggins as a stepdad from whom he keeps arms’ distance, are also really fine here. And a shout-out to the ever-reliable Andy Garcia nicely playing a priest who is almost like a therapist for Adam in the confessional. The music from The Chainsmokers is also worth a special mention.

This one could have gone off the rails. Fortunately it doesn’t, and much credit belongs to Plummer for keeping it real. Producers are MIckey Liddell, Pete Shilaimon and Freudenthal. LD and Roadside Attractions are releasing it Friday.

Check out my video review above with scenes from the film. Do you plan to see Words on Bathroom Walls? Let us know what you think.