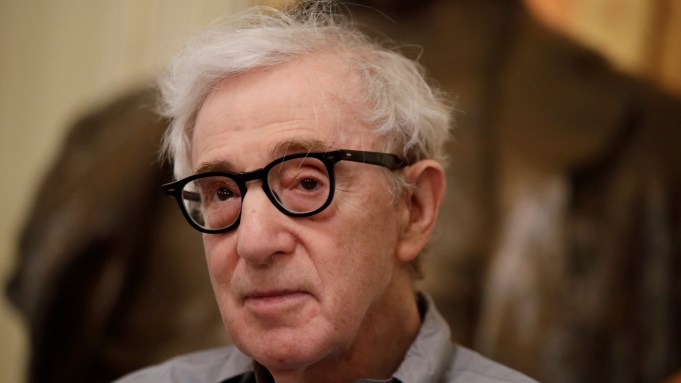 Woody Allen says he “couldn’t care less” if Hollywood never comes calling (“I’ve always worked in New York”) and maintains he should be a “poster boy” for the #MeToo movement for his long history of working with women.

In an interview with French news network France 24 (watch the video above), the director, whose A Rainy Day in New York opens the Deauville American Film Festival today, was asked by the network’s Vincent Roux (“I was warned he would not comment on this but I had to give it a try”) about the backlash that followed adopted daughter Dylan Farrow’s renewed accusations of child molestation.

Asked whether he still believes he should be a poster boy for the #MeToo movement, Allen points to his history of working with actresses without “a single complaint.”

“I’ve worked with hundreds of actresses,” Allen says. “Not one of them has ever complained about me. Not a single complaint. I’ve worked with, employed women…in every capacity for years and we’ve always paid them exactly the equal of men.

“I’ve done everything that the #MeToo movement would love to achieve with everyone,” he says.

Allen also addresses the absence of a U.S. release for A Rainy Day in New York. “To me, it doesn’t matter. To me, the movie’s being released all over the world. If people enjoy the movie, I think it will eventually be released in the United States. If people come and they say this is boring, I hate this movie, I don’t like it, there will be no enthusiasm to release it in the United States.

“But for me it doesn’t matter. I’ve already finished another movie. Rainy Day is history.”

The Farrow allegations resurfaced this week when Dylan Farrow responded to a statement of support for Allen by actress Scarlett Johansson. The Vicky Cristina Barcelona star told The Hollywood Reporter, “He maintains his innocence, and I believe him.”

Farrow responded with a tweet: “Because if we’ve learned anything from the past two years it’s that you definitely should believe male predators who ‘maintain their innocence’ without question. Scarlett has a long way to go in understanding the issue she claims to champion.”