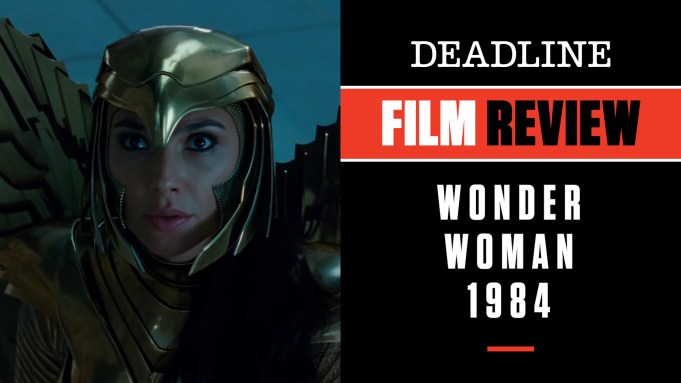 Wonder Woman 1984 has been delayed due to the pandemic, and it might not be the kind of theatrical big-screen release for which it was planned, and the way it is hitting multiplexes and home screens via HBO Max day-and-date is controversial to say the least, but the movie itself is a lot of fun.

That is not to say this sequel to the 2017 worldwide smash is better. It isn’t. But it certainly is bigger and, because the relationship at its center between Diana Prince aka Wonder Woman and WWI pilot Steve Trevor is cleverly re-ignited, it is also even more emotional and funny too — thanks to the chemistry between the incomparable Gal Gadot and Chris Pine returning in those roles. Director Patty Jenkins, who also cooked up the screenplay this time with Geoff Johns and David Callaham, really jacked up the action set pieces too, with one spectacular excuse after another to see Wonder Woman go at the bad guys in every way imaginable in order to save earth from itself as, among other things, it stands to blow itself up with nukes.

It starts even before the opening credits as the young Wonder Woman (Lilly Aspell) competes in the exciting Amazon Games on her island paradise but finds she still has much to learn from mentors Antiope (Robin Wright) and Hippolyta (Connie Nielsen) as she awkwardly exhibits the early potential to become the ever-immortal power for good that we know she will be. This is a dazzling beginning that makes way to Washington, D.C. circa 1984, where Diana, now 66 years after first appearing to save mankind when she flew into Earth in 1918, is keeping a low profile in her work curating ancient artifacts at the Smithsonian. There she works with an unassuming colleague, the bookish geologist Barbara Minerva (Kristen Wiig), and into their museum world comes a mystery stone, one that it turns out upon investigation can invest its owner with unheard-of powers just in return for a wish. That is sort of a hokey excuse for all the mayhem to come, but hey you need something to get the ball going, right?

Turns out that stone works its wonders on Barbara, who slowly morphs from meek to mighty and soon transforms into Wonder Woman’s archnemisis and villain The Cheetah as she finds value and self-worth in new powers invested inside. The same goes for interloper Maxwell Lord (The Mandalorian’s Pedro Pascal), a snake oil salesman selling his as-yet-undiscovered oil riches to unsuspecting TV viewers via his infomercials. He finds he and Barbara/Cheetah might have more in common that he lets on, as he manages to snatch the stone while seducing her and then finds it disintegrates into his being when he makes his ultimate wish to control the world’s oil supply, or at least half of it. Suddenly this goofy guy is the real deal — and a dangerous one at that.

Meanwhile, Diana meets a handsome stranger who morphs into the long-lost Steve Trevor, a poignant reunion that finds, however it happens, that she once again is with the only person for whom she ever experienced true love. Their reteaming now in the out-for-myself world of the ’80s is inspired, as it changes the dynamic from the first film, where Diana was the fish out of water, now to Steve, who is in a place far removed from his piloting during the First World War. Lots of the film’s smart, pithy humor comes from him, in particular during a montage sequence where he is trying to figure out how to blend into his new environment by trying on all sorts of gaudy ’80s outfits to win Diana’s approval. That kind of sequence usually is reserved for “movies for women” to display a lot of fashion sensibilities, but Jenkins turns the table and makes it a fresh bit by doing it on a man.

Of course, the main attraction in these DC comic book movies are the action scenes, and Jenkins puts Gadot through the ringer with one after another including a convoy battle on the roads outside Cairo, where the quest for oil is heating up. Earlier on she displays her full Wonder Womanhood by squelching an attempted shopping mall jewelry heist and saving a young kid in the process. It all eventually leads up to a spectacular battle royale at none other than the White House, where Wonder Woman runs amok against both Max and Cheetah, and then a big showdown between those two. As for Max, he has a kid he is worried about, a device to make this over-the-top power freak just a little human. I really liked Pascal in this role, if only because he doesn’t fit the bill for your usual comic book villain. Wiig does, though, and manages to be credible as one of WW’s most cunning opponents.

It all makes sense that, if you are going to go down the path of a sequel, it should be in another time and place than the first one. Shrewdly, the filmmakers set this one smack in the middle of the Gordon Gekko Greed-Is-Good ’80s, an era that subscribed to the idea that you can never get enough for yourself. Diana aka Wonder Woman is the perfect antithesis for that as she believes in good and love over bad and evil, and in the end, her philosophy is what is needed to find our better selves. It is a good message right about now for a movie whose main aim is just to entertain. Thanks to Gadot and company, they do just that.

Producers are Charles Roven, Deborah Snyder, Zack Snyder, Stephen Jones, Gadot and Jenkins. This really is the ultimate large-format screen experience, but Warner Bros couldn’t hold out any longer and sent to its nascent streaming service HBO Max just in time for Christmas so viewers can gobble it up on their TV sets (at least for a month). Hopefully they will choose to see it the way it should be seen, in a theater. Still, it managed to work well enough for me on my 85-inch Sony, so until Wonder Woman herself swoops in to save exhibition, it’ll have to do. Here’s hoping things are back to normal, not the “new normal,” by the time the inevitable next sequel comes around.

Check out my video review with scenes from the movie at the link above. Do you plan to see Wonder Woman 1984? Let us know what you think.