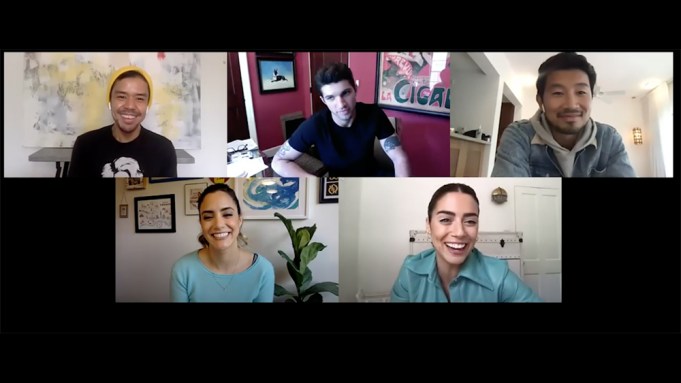 Women Is Losers is the type of movie that will catch you off guard — in a good way. What seems like a relationship dramedy quickly turns into an examination of gender and racial identity that applies to nearly everyone who has had to face barriers in their career and life. Writer, director and producer Lissette Feliciano was joined by the film’s actors Lorenza Izzo (who also serves as an Executive Producer), Simu Liu and Bryan Craig to unpack Women Is Losers and how the meta, fourth-wall breaking story set in ’60s San Francisco applies to 2021.

The movie follows a once-promising catholic school girl, Celina (Izzo) as she sets out to rise beat the odds and fight oppression and poverty to invest in a future for herself and her son that sets new precedents for the time — and it’s quite an emotional journey.

For Felciano, the idea came from a conversation she had with her mom as she was struggling with her career that didn’t have to do with her work ethic. She points out that immigrant moms teach you to work hard and keep your head to the grindstone — something that all the cast members on the panel could relate to. If it’s hard, don’t complain and work harder.

“I was doing all of that and nothing was working,” said Feliciano. She was expecting her mom to deliver the same “work hard” rhetoric but this time it was different.

“She told me about all the things she went through in the ‘60s and ‘70s as she was trying to progress in in her industry which was real estate,” explained Feliciano. Her mom had so many barriers to move forward in her work and Feliciano realized the same barriers were happening in her career.

“I didn’t know how to protect myself and enter these spaces and hear the unheard thigns being said to me,” said Feliciano. “No one ever tells you that you can’t do it — they kind of just don’t say anything.”

When she started researching the time period, she realized that all of these barriers were legal back in the ‘60s and ‘70s. It’s not legal on paper anymore, but it’s still happening. “I wanted to create a story that was essentially that conversation with my mother and our characters have that conversation with the audience,” she said.

The film very much explores this concept of how people in the margins succeed in spaces not made for them and careers where they aren’t necessarily welcome. This includes immigrants, people of color, the disabled, queer people, women and, even more specifically, women of color.

As a Chilean immigrant who moved to L.A. with a “big fat dream”, Izzo immediately connected to the story of Celina. “I’ve been a firm believer of the American Dream,” said Izzo. “This script was such a raw mirror to me and what my mom went through.”

She continued, “We’re talking about a generation of a certain kind of peiple that are limited by the possibities and the amount of information and resources.” Izzo talks about how the story explores how those in the margins can break that mold.

Watch the full interview above to hear Feliciano and Izzo elaborate on this and how the film helped Craig and Liu, as men, address their own blindspots when it comes to the treatment of women.