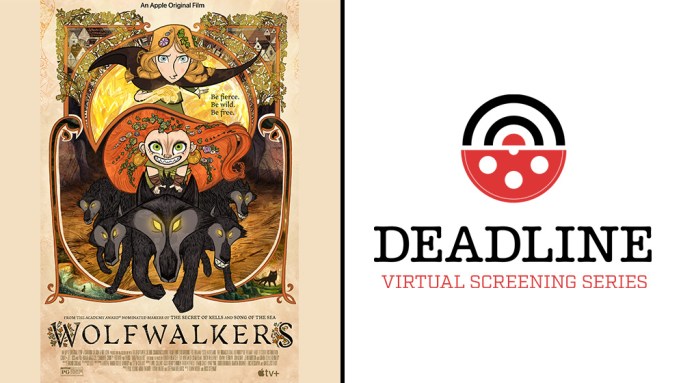 For directors Tomm Moore and Ross Stewart, Wolfwalkers wrapped up a critically acclaimed ‘Irish Folklore Trilogy’ first conceived over a decade ago, manifesting visual ideas that the pair had long wanted to explore.

Rooted in the history of 1650s Ireland, the animated adventure pic centers on Robyn (Honor Kneafsey), an apprentice hunter who journeys with her father from England to wipe out a pack of wolves. Confined by the Puritanical society in which she’s been raised, Robyn experiences true freedom for the first time only when she befriends Mebh (Eva Whittaker), a girl from a mysterious tribe, which is said to transform into a pack of wolves by night.

In a recent panel discussion on the film, as part of Deadline’s Virtual Screening Series, two-time Oscar nominee Moore and first-time director Stewart explained that heading into Wolfwalkers, they were looking to visually contrast the utterly distinct worlds inhabited by Robyn and Mebh. “We wanted to use all the tools in our toolkit, all the visual language tricks that we’d learned over the years, to really emphasize the difference in mindset of the people who represented the town, and the people that represented the forest. So, the environments are very different, in one way,” Moore said. “The town is very geometric and based on woodblock prints, and very harsh outlines on everything, whereas the forest is much more sketchy and loose, and more like watercolor style.”

Early on, the directors also hoped to embrace and expand on on a kind of visual expression they’d admired in Isao Takahata’s 2013 Oscar-nominated feature, The Tale of the Princess Kaguya. “[We wanted to] have it that the characters will be drawn differently, depending on their emotional state, and on which world they were aligned with, at that time in the story,” Moore explained. “So, we see Robyn go from being very geometric, very segmented, to becoming sketchier, and rougher, and more flowing, the more she becomes part of the forest….over the course of the movie.”

Known for their love of carefully crafted 2D animation, the directors brought the film to life through the use of “an awful lot” of paper, ink and pencils, Stewart said. “But even though we make hand-drawn animation, a lot of artists will work on Cintiqs, which is basically, instead of drawing on paper, you’re drawing straight onto the screen.”

For Moore and Stewart, one of the most exciting aspects of Wolfwalkers was that it allowed them explore the subjective experience of animal protagonists, in a way they’d never done before. At the same time, this component of the film proved to be one of the most challenging to deal with. Hand-rendered on paper in pencil and charcoal, scenes involving ‘wolf vision’—which comprised little more than three minutes of footage—ultimately took the entire length of the production to perfect.

“The hard part about wolf vision was trying to describe that way of interpreting the world through a visual medium, which is kind of an ironic or backwards way of approaching that. Really, there’s no way to experience it, without just experiencing it,” Stewart said. “But we just had to focus on the scent being the most luminous, golden part of Robyn’s experience, following Mebh, and then the backgrounds are very muted, rough and desaturated, because wolves don’t have that great of a color vision.”

Another primary challenge on the film had to do with story. “We thought we had a pretty strong script, and I guess it was strong, but once we had it all up in reels and the storyboard, we realized that we had a lot of work to do, to make sure that the focus was as firmly on the two girls, the main characters, as we wanted it to be,” Moore said. “What was challenging was, we realized that we were going to have to rewrite the first act after we’d made the entire movie in story reels.”

In retrospect, though, Moore and Stewart couldn’t be more proud of that first act, and of the film as a whole, which has generated a huge level of acclaim throughout awards season. Named Best Animated Film by both the Los Angeles Film Critics Association and the New York Film Critics Circle, and more recently claiming a Golden Globe nomination in the Animated Feature category, Wolfwalkers looks poised now to lock down an Oscars slot.

“It’s amazing because you kind of always hope that the next one doesn’t let you down, that you’ve done a good enough job,” Moore admitted. “I think for everybody, it’s nice to see a relatively small, European movie be embraced so well.”

For more from our conversation with the pic’s directors, click on the video above.