Continue to Deadline SKIP AD
You will be redirected back to your article in seconds
Skip to main content
June 13, 2021 8:30am 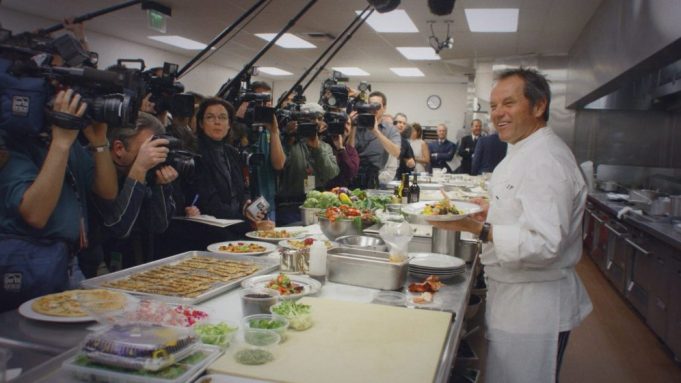 Austria has produced a couple of amazing Wolfgangs: in the 1700s, Wolfgang Amadeus Mozart and, much more recently, Wolfgang Puck, who might be described as a Mozart of the kitchen.

Puck, who rose to become America’s first celebrity chef after opening his restaurant Spago in Hollywood, is the subject of the documentary Wolfgang, which premiered at the Tribeca Festival Saturday night. The film directed by David Gelb reveals Puck overcame difficult circumstances, growing up poor in an Austrian town with a stepfather who abused him mercilessly.

“I always put it on the back burner, on the back of my head and never really want to talk about it,” Puck said during an appearance in Deadline’s virtual Tribeca Studio. “This was really the first time where people actually knew about my stepfather, may he rest in peace now. But he was terrorizing our family and it was really a terrible experience when I look back. If I would write the new playbook for my kids, I look at his playbook and do exactly the opposite and I will be fine, I think.”

To Gelb, the director of the food-themed documentary Jiro Dreams of Sushi and the Netflix series Chef’s Table, Puck tells “his story in a way that people really haven’t seen before and with such incredible kind of candor and vulnerability that… I think really makes it unique, so you’ll see kind of a different side of Wolfgang than people are maybe used to.”

“I think it goes beyond that. I think it’s the way the world perceives food and cooking in general that Wolf has had a tremendous impact on,” Gelb noted. “He’s introducing Americans to ingredients that they just didn’t realize were even there… He was creating kind of these farmer salads, telling people where the produce comes from, giving a bit of a story, a bit of a context to the food that makes it more delicious.”

The film gives due credit to Barbara Lazaroff, Wolfgang’s business partner and ex-wife, who helped him build his restaurant and business empire during their 20 years of marriage. She designed the original Spago in West Hollywood, which featured an innovative “open kitchen” plan where diners could get a sense of the haute cuisine being made.

“The idea—and this is what Barbara describes in the movie—is the kitchen becomes a stage and the chef is now the star,” Gelb explained. “She took Wolf’s vision and put it on this big scale, which I think is really awesome.”

Puck says he’s pleased with the way the film turned out.

The Deadline Studio is sponsored by Verimatrix. Watch the full conversation with Wolfgang Puck and director David Gelb in the video above.