Continue to Deadline SKIP AD
You will be redirected back to your article in seconds
Skip to main content
April 28, 2021 8:59am 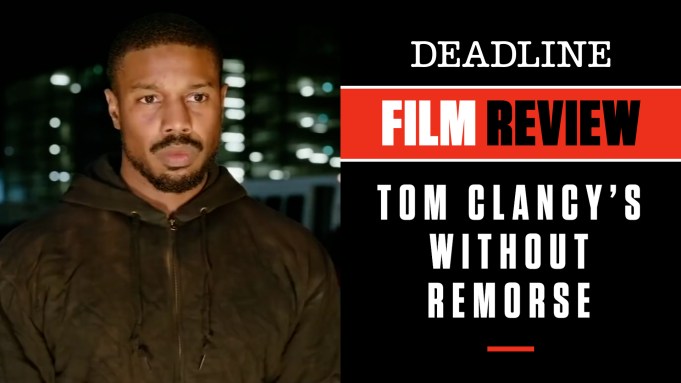 After seeing Tom Clancy’s Without Remorse I can’t say I really understand why Paramount unloaded this intended franchise-starter to Amazon for a streaming debut beginning Friday. With theaters reopening and with Michael B. Jordan displaying strong action star bona fides, this origin story of popular Clancy character John Clark would seem to be a slam dunk for box office success. The latest in the venerated studio’s efforts to bring Clancy to the screen doesn’t scream originality, but it certainly has enough firepower to make an impact due to the shrewd shoot-first-talk-later style of its stoic hero.

Introduced in 1988’s Cardinal of the Kremlin and followed with appearances in 20 Clancy novels as well as 14 popular Rainbow Six video games, the John Clark character has made a couple of supporting appearances in previous films like 1994’s Clear and Present Danger, where Willem Dafoe played him, and 2002’s The Sum of All Fears, in which Liev Schreiber got a shot. Both were Jack Ryan-driven vehicles, but now in this adaptation of Clancy’s 1993 origin story, Without Remorse, Clark gets the leading role for the first time, and Jordan proves the perfect casting. The actor was an avid player of the video game growing up, so he got a head start on what to do with the character and, given the choice of several Clancy scenarios, plugged into this one, in which he plays then-named John Kelly, a Navy SEAL and Sr. Chief we first meet in Syria on a mission to free a CIA operative being held by ex-Russian military.

The mission is a success, and the movie cuts to three months later as we are switched to Washington D.C. and get to know Kelly’s personal life with a very pregnant wife, Pam (Lauren Landon). and their seemingly idyllic existence as they prepare for their first child. Russian bad guys have another idea as they set about covertly to launch a home invasion on Kelly and family in retaliation for his part in that Syrian operation.

In a gripping action sequence, Kelly gets wind of it but not before they have slaughtered Pam as she lay in bed. Kelly kills all of them, save one, but is critically injured and near death. He survives and channels his grief into a new mission to find the one that got away, which he does in forcing a Russian diplomat responsible for getting the killers American passports to give him the name of the man he is after.

This particular encounter lands Kelly in prison, but he gets out by providing the government the name of the wanted Russian, Victor Rykov (Brett Gelman). After huddling with his superior, Lt. Cmdr. Karen Greer (Jodie Turner-Smith), a shady CIA agent Robert Ritter (Jamie Bell), and Secretary of Defense Thomas Clay (Guy Pearce), the former two join him in tracking down Rykov, who is hiding out in Murmansk, Russia. But before their plane can land, it is shot down and sinks into the Bering Sea. However, the SEAL training of this team leads to their survival in an exciting underwater sequence. Once on land, they set out on their mission, only to uncover far greater devious plans being set in motion to possibly put the U.S. and Russia in a confrontation that could explode into war.

Italian director Stefano Sollima proved he knows how to stage effective action in his American feature debut Sicario: Day of the Soldado, and he doesn’t disappoint here, although a big set piece with an elaborate shooting match after they land in Murmansk goes on far too long and looks like it was lifted right from one of the video games the Clark character is known for. But yet another underwater sequence rescues the film as it takes twists and turns when Kelly zeroes in on the real culprits behind the master plan, a development Clancy fans won’t find terribly surprising but it provides the impetus for more killing.

It should come as no surprise that this character fits Jordan like a glove and he fires on all cylinders, a very different kind of action figure than Jack Ryan, who is much more methodical. Kelly clearly goes for the jugular, and this is perfectly set up for a franchise afterlife as Kelly morphs into his permanent identity as John Clark in a mid-end credits sequence I recommend not turning away from. Bell, Turner-Smith and Pearce all do what is asked of them, but the film, shot largely in Berlin, is Jordan’s showcase.

Screenwriters Taylor Sheridan and Will Staples keep the emphasis on action and serve up a script that fans expect from this kind of source material, even if it lacks the sharp tongue of the best action flicks.

Amazon, which is home to the Jack Ryan TV series now, launches this Friday. Producers are Akiva Goldsman, Josh Applebaum and Andre Nemec, Check out my video review with scenes from the film at the link above.

Do you plan to see Tom Clancy’s Without Remorse? Let us know what you think.