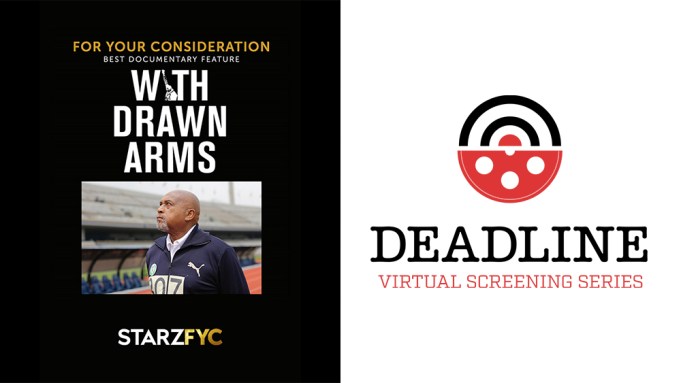 It’s the most famous symbolic protest in all of sport, and one of the most potent in American history.

In October 1968, U.S. sprinter Tommie Smith took the podium after winning the gold medal in the 200-meter dash at the Summer Olympics in Mexico City. As the national anthem began to play, Smith and his teammate, bronze medalist John Carlos, each raised a black-gloved fist, their heads bowed. That silent gesture—was it a Black Power salute, a prayer, a message of dissent?—triggered an international uproar, and debate about its meaning has persisted to this day.

The Oscar-contending documentary With Drawn Arms explores the impact of that iconic moment on America and on Smith himself, who took the medal stand at the tail end of the civil rights movement. During a panel discussion of the film for Deadline’s Virtual Screening Series, Smith described his intent that day in ’68.

“I had to clarify as best I could, without saying a word, about things that needed changing [in America],” Smith explained. [With Drawn Arms] highlighted that need to fight the best you could in that particular time. Folks, it was my life which I fought with.”

The film gets into the backlash Smith and Carlos faced, a stinging response of disapproval familiar to a succeeding generation of outspoken sports stars.

“It’s so clear how relevant their powerful statement is today because we see the role of athletes in popular culture in discussing politics, in discussing racism in America, we see that role being actively contested today,” said John Legend, who executive produced the film through his production company Get Lifted Film Co. “Of course Colin Kaepernick, but…so many other athletes are being told to shut and dribble or shut up and catch a pass or throw a pass and this shows that this is part of their legacy, this is part of Tommie’s legacy, that these athletes are out there making their voices heard.”

Actor Jesse Williams, a fellow executive producer of With Drawn Arms, has become a prominent activist for social justice.

“There are behaviors and moments in time that absolutely change the course of history,” Williams said, referring to Smith’s and Carlos’ gesture. “As human beings we learn by watching…We’ve all had a feeling, but seeing somebody do something with it that was different, that was going against the current, absolutely changes the course of our behavior. …It needs to be honored and examined and we can learn a lot from it.”

Glenn Kaino and Afshin Shahidi combined to direct the film.

“It’s been an honor of our lifetime, Afshin and I, to be part of this and be trusted with the story,” Kaino said. Added Shahidi, in reference to Smith’s silent salute, “It was an act of defiance but it was an act of compassion on his part and it took immense bravery.”