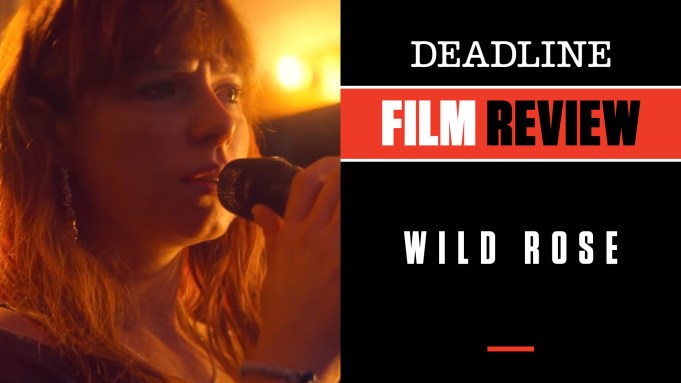 One of the unexpected highlights and pleasures of last year’s Toronto International Film Festival was a discovery by the name of Jessie Buckley, who soars in director Tom Harper’s transcendent musical drama Wild Rose. Although she currently can be seen in the HBO limited Series Chernobyl and in a supporting role in the upcoming Judy, singer-actress Buckley dominates this tale of a Scottish mother of two who is more interested in becoming a country music star than in anything her kids require.

In fact, Rose-Lynn’s life is a bit of a mess, and the film opens as she just has been released after being in prison for a year on drug charges. Rather than running to see her family, she stops by her boyfriend’s house for a romp in the sheets. Eventually makes her way to her mother’s (Julie Walters), who has been taking care of the 5-year-old boy who doesn’t seem to remember his mom and 8-year-old daughter who wants nothing to do with her. But her real love lies in going to the local Glasgow Grand Ole Opry bar, where she sings with the best of them, tattooed with the belief in country as “three chords and the truth,” thus her ultimate dream to get out of there and try her luck in Nashville.

Her mother has other plans for her and helps to get her a job as a housekeeper for Susannah (Sophie Okonedo), who is a good-hearted person, and once she hears Rose-Lynn sing, she decides to raise the money through friends to get her to Nashville. Once in Music City, the film seems to be on a predictable path but turns out to be anything but. Harper and screenwriter Nicole Taylor’s story has some unexpected turns for Rose-Lynn, and it is all wholly satisfying by the time the credits roll. You will walk out humming those tunes too.

The highlights of this film, however, are whenever Buckley gets to sing. She’s a natural and, though actually Irish, is completely convincing with a deep Scottish brogue. If Rose-Lynn has star quality, that goes 10 times for the person bringing her to life. The music throughout is thoroughly engaging, topped by the poignant and heart-lifting song, sure to be an Oscar nominee, called “Glasgow,” written by the Oscar-winning actress Mary Steenburgen (who knew?). Okonedo is a warm presence in the film, as is Walters and the rest of the supporting cast. This is a special one. The producer is Faye Ward. Neon puts it in limited release Friday.

Do you plan to see Wild Rose? Let us know what you think.