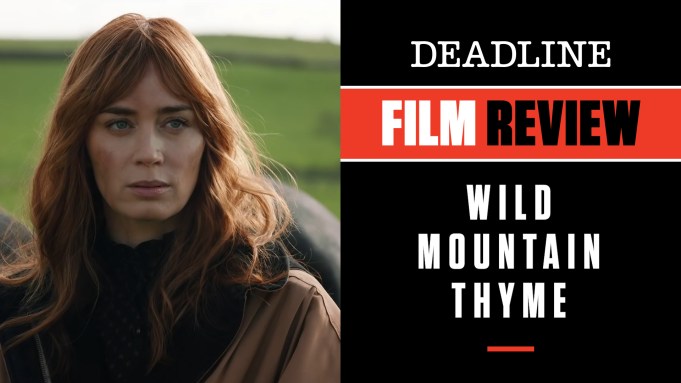 Wild Mountain Thyme is an Irish charmer of the tallest order and the most winning romantic comedy of 2020, not that there is a whole lot competition for that title in this strange year. Prepare to be swept away for two glorious hours to an idyllic place that will make you forget the woes of the real world, and I believe a lot of us could use that right about now.

Jamie Dornan and Emily Blunt are irresistible as star-crossed farm neighbors who just can’t quite get the romance thing going in this perfectly timed gift from writer-director John Patrick Shanley, who won an Original Screenplay Oscar for Moonstruck. He strikes again with quirky and loving characters you won’t soon forget.

Rosemary Muldoon (Blunt) has been stuck on her neighbor Anthony Reilly (Dornan) since they were 10 years old, but he just doesn’t seem to get it. An awkward guy more immersed in his farm animals than thoughts of romantic yearnings, he has spent most of his life helping out his father, Tony (Christopher Walken), who is now widowed and — unbeknownst to his son — agreeing to sell the family farm to an American interloper, his nephew Adam (Jon Hamm). You probably don’t have to guess that with Hamm in the part, Adam turns out not just to be a suitor for the farm, but also pretty Rosemary, especially since Anthony isn’t really putting up a fight for her.

Thus your typical love triangle of sorts — but one, thanks to the winning and fresh writing of Shanley, never is predictable but always is pure delight. You really come to root for all these people living out their lives, seemingly oblivious to the outside world in an idyllic Irish setting that seems like something out of time.

Shanley based this film version on his play, Outside Mullingar, and has found the ideal Irish location in County Mayo to bring it gorgeously to life. Stephen Goldblatt’s lovely cinematography captures it all, along with the sweet sounds of the note-perfect score by Amelia Warner. And the cast Shanley has assembled is note-perfect as well. Blunt again proves she is up for anything and makes Rosemary a real catch, obvious to everyone but Dornan’s oblivious but lovable Anthony. Sparks fly between the pair by essentially burying them far under the surface, but these two actors make us hope, as much as Rosemary herself, that they will find a way to get together. Ah, the essence of good rom-coms, eh?

Hamm could have been the villain, even luring Rosemary to a first-ever trip to New York City. After all, is she going to wait forever for Anthony to discover that true love was right under his nose his whole life? Hamm never makes Adam a bit unlikable, and we are also rooting for him to find happiness too. Taking the acting honors, though, is Walken, effectively sporting an Irish accent and now living a bittersweet life as things change around him. An emotional scene between Tony and his son is heartbreaking, and Walken delivers it with such humanity and depth that it is worthy of another Oscar nomination for this journeyman star. He is just wonderful here. So is Dearbhla Molloy — the only cast member from the original play to make it to the movie — as Aoife Muldoon, the loving mother and wife.

For movie lovers who wish for a sweet romantic comedy, with people you want to spend a little time with, Wild Mountain Thyme is like finding a pot of gold over the rainbow. Pure old-fashioned movie magic. Producers are Anthony Bregman, Bradley Gallo, Michael A. Helfant, Martina Niland, Leslie Urdang and Alex Witchel. Bleecker Street opens it in theatersff and on VOD Friday. Check out my video review with scenes from the movie at the link above.

Do you plan to see Wild Mountain Thyme? Let us know what you think.