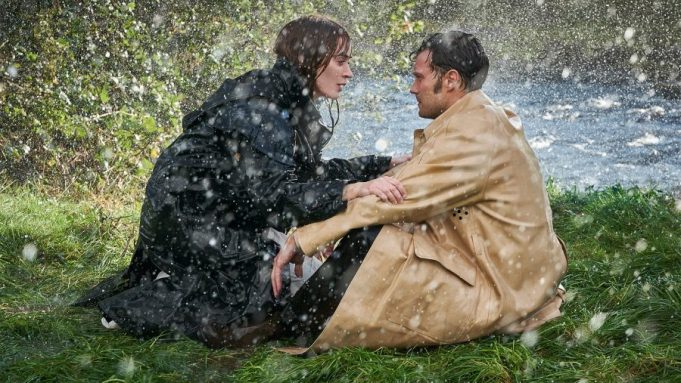 The girl loves the boy on the next farm over, but he doesn’t get it. Now the grown woman loves the grown man on the farm next door, and … he’s still clueless.

Here is the trailer for Wild Mountain Thyme. Set amid the 40 shades of green in rural Ireland, it follows Rosemary Muldoon (Emily Blunt), whose unrequited love for the boy from the neighboring patch o’ land is maddening. Her heart is set on winning his, but Anthony (Jamie Dornan) seems to have inherited a family curse, and remains oblivious to his admirer. But, stung by his father’s (Christopher Walken) plans to sell the family farm to his New Yorker nephew (Jon Hamm), Anthony is jolted into pursing his dreams

Jon Tenney, Dearbhla Molloy, Danielle Ryan and Lydia McGuinness co-star in the film from Academy Award-winning Moonstruck writer John Patrick Shanley, who adapted the screenplay from his Broadway play Outside Mullingar. He also directs for the first time since 2008’s Doubt, for which he scored an Adapted Screenplay Oscar nom.

When the film was being sold at Cannes last year, Leslie Urdang and Alex Witchel said: “Shanley’s language, humor and heart are treasures that always surprise, enlighten and entertain us. By creating such specific, idiosyncratic characters in Wild Mountain Thyme, he manages to make the world feel bigger and more hopeful. Certainly more romantic.”

Bleecker Street will release it December 11 in U.S. theaters and on demand. Check out the trailer above.