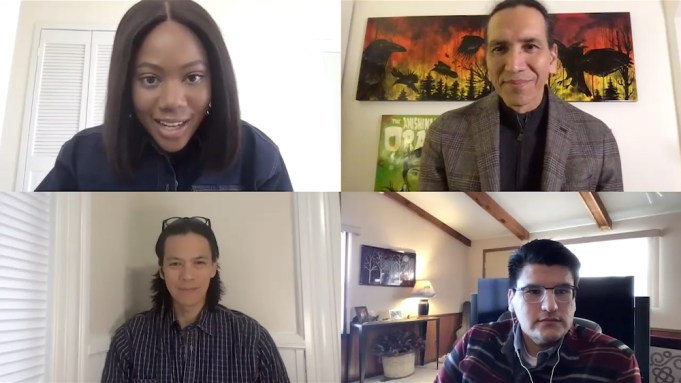 “I was in my mid-twenties and I went back to my reservation and I was feeling pretty disconnected from my community and just where I was in my life at that point. So I just started writing about those feelings,” said Corbine Jr. during his stop at Deadline’s virtual Sundance studio.

“There’s definitely something that I just wanted to express that was going on in my head. And that’s where I started with it,” he added.

Corbine Jr. was joined by the film’s stars Michael Greyeyes and Chaske Spencer.

“When I first read the script, I knew immediately that I wanted to play this character. I think mostly for me because the film placed an indigenous man inside a narrative frame, usually reserved for people from other cultures,” said Greyeyes, who plays Michael, a man that has seemingly moved on from his reservation and fractured past. When childhood friend (Spencer) who shares his violent secret returns to seek vengeance, Michael goes to great lengths to protect his new life.

“The thing that strikes me about Wild Indian, the thing that strikes me about contemporary films that we make, are that they’re incredibly complex and you can look at them as documents into much larger questions,” Greyeyes remarked. “Like for me, I think the relationship that Chaske and I have in terms of the kind of men that were presenting as examples of contemporary indigenous people are radically different.”

He continued, “In understanding our history, we’re dealing with layers of intergenerational trauma and how people recover and how people survive. So I think when you look at it, indigenous stories, even our comedies, there’s a complexity to who we are, where we come from, that’s always present even when we tell personal stories.”

For Spencer, “There’s been some good native films that have come out but you don’t get to really see them. They’re not really promoted as much. And what I liked about this is that it’s, I don’t want to say it’s a mainstream film, but it kind of is. I think it really touches on what’s going on around today as well. We live in a pretty uncertain time and I feel the film carries that with its tone.”