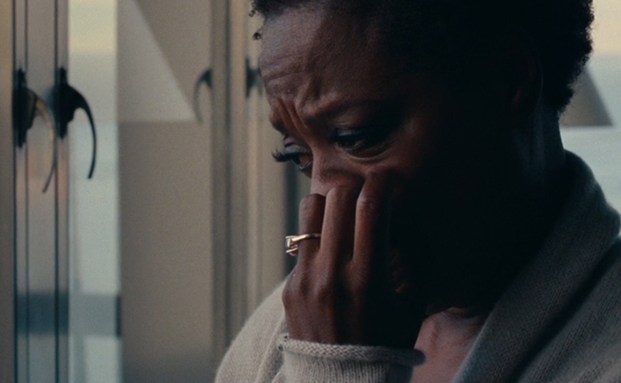 In 1983 director Steve McQueen, eventual Best Picture Oscar winner for 12 Years a Slave, became obsessed with a British miniseries called Widows about a group of women who decide to finish a robbery that their criminal husbands died trying to pull off. In a collaboration with Gone Girl screenwriter Gillian Flynn, McQueen finally has found a way to bring it to the big screen while switching gears from his gritty indie movies to the action genre; moving the locale from London to contemporary Chicago; and adding issues dealing with race, injustice, class, women and social unrest. As I say in my video review (click the link above to watch), it’s a heady brew indeed for a heist movie, and though some might compare this all-female job to last summer’s Ocean’s 8, in which Sandra Bullock led a gang of ladies in a jewel robbery at the Met Gala, this one has a much more serious and sober tone to it.

Early on and in flashbacks we see Veronica (Davis) seemingly happily married to Harry (Liam Neeson). Davis and Neeson demonstrate strong chemistry, so it comes as a shock when he and his cohorts in crime are knocked off quickly as a planned heist goes terribly wrong in an explosion and police shootout. In no time the results of all this hit home as Veronica gets a visit from local crime boss Jamal Manning (Brian Tyree Henry), who reveals that Harry’s gang stole $2 million from him. And he wants it back. Accompanied by a henchman (Daniel Kaluuya, creepily evil), he demands the money or there will be consequences, to say the least.

Determined to fix this, Veronica sets out to finish the heist with the assistance of three other women she brings together. They aren’t exactly experienced in this area, and there is nothing they really have in common as each comes from a distinctly different background and class. But the teaming turns out to be combustible: There’s Alice (a terrific Elizabeth Debicki), a young Polish woman tied to a controlling mother (Jacki Weaver) and anxious to set out on her own; Linda (Michelle Rodriguez), who needs cash to bolster her dress shop; and eventually Belle (Cynthia Erivo), a tough and savvy hairdresser who might be most confident of all. The story gets more complex as it brings in Jack Mulligan (Colin Farrell), a local politician who had some connection to Harry’s plans and is running for alderman in the mostly African-American district that his retiring father (Robert Duvall) has long ruled. The complication is that Manning also is running as he tries to gain some legitimacy.

It goes on from there as McQueen weaves in social concerns on his mind while crafting a nail-biting ride blessedly fronted by a talented group of actresses. It covers a lot of ground and twists, but rest assured that Widows should please action fans and admirers of McQueen’s previous films equally as he ventures into different territory but succeeds as a distinctive and smart filmmaker. Widows is a gripping heist movie and sensational thriller loaded with action, high drama and a superb ensemble cast. Davis shines again, and Debicki is particularly brilliant. I was on the edge of my seat. McQueen delivers screen dynamite. Producers are Iain Canning, Emile Sherman, Arnon Milchan and McQueen. 20th Century Fox opens it wide on Friday.

Do you plan to see Widows? Let us know what you think.