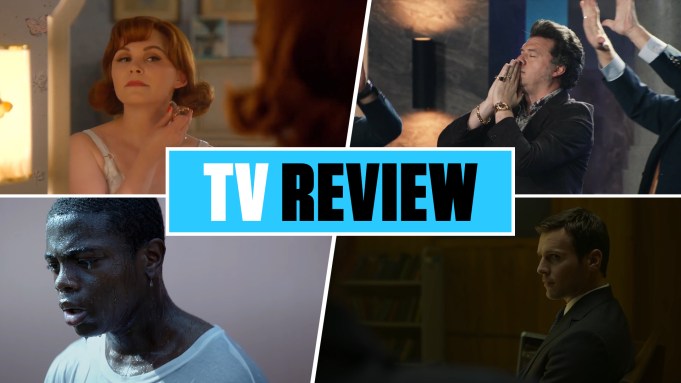 The swan song of summer includes a heat wave of premieres and launches this week, but only one will truly sizzle as the show you have to watch. With death, faith and the Sunshine State all in play, take a look at my video review above to see what my verdict is for your viewing pleasure.

A partner in wealth and excess to fellow HBO Sunday nighter Succession, the Danny McBride-created The Righteous Gemstones premieres August 18, going behind the camera for a family of very rich and very famous TV preachers, in their virtues and sins.

Shepherding the megachurch faithful, John Goodman portrays the sometime puritanical patriarch Eli Gemstone, with McBride as his decadent oldest son Jesse; Edi Patterson as middle sibling Judy; and Adam DeVine as youngest child Kelvin, a rising ministry star with secrets of his own. McBride’s Vice Principals co-star Walton Goggins is on board too as the trio’s wayward uncle, given his small patch of the Gemstone preaching empire.

Debuting tonight on OWN, the Michael B. Jordan- and Oprah Winfrey produced David Makes Man finds Akili McDowell shifting and contorting himself to find a place in Florida, the world and his own mind. Created by Moonlight co-writer Tarell Alvin McCraney and having premiered at Sundance earlier this year, the 10-episode series co-starring Alana Arenas and Phylicia Rashad comes of age through the anxiety of youth, race and expectations from all sides.

Netflix’s Mindhunter is back August 16 for a second season after a nearly two-year absence to what was not only one of the best shows of 2017, but of the Peak TV era. The David Fincher-produced series finds Holt McCallany and Jonathan Groff returning to their roles as FBI agents probing the minds of serial killers in the 1970s to understand how the worst of humanity thinks in order to stop more murder and mayhem. This cycle finds the duo and their Behavioral Sciences approach more strongly embraced by the Bureau. Yet it also finds them and co-star Hannah Gross venturing into the horrors of the Atlanta child murders that stalked the Georgia metropolis from 1979 to 1981.

Destined to be a sharp sword for the soon-to-be reunited CBS and Viacom, CBS All Access adds Why Women Kill tomorrow to its programming. Starring a 1960s-set Ginnifer Goodwin, a Reagan Era Lucy Liu and a modern-day Kirby Howell-Baptiste, the 10-episode series from Desperate Housewives creator Marc Cherry pivots across decades as three very different ladies take matters domestic and romantic into their own hands.

Now that you know the players, who makes the killer move to be the show you have to watch this week? Watch my review and find out.