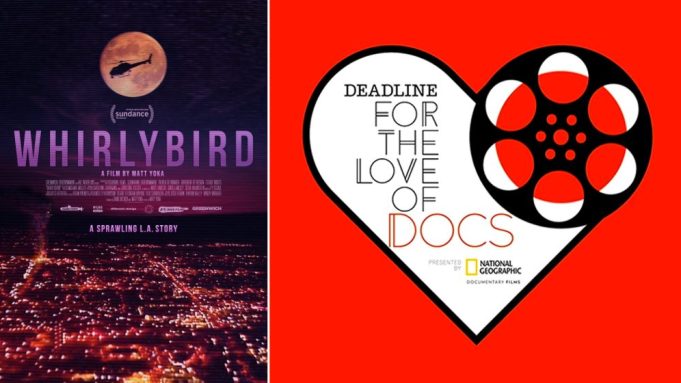 For those living in Los Angeles or other major American cities, it may be hard to imagine a time when news helicopters did not hover over seemingly every breaking news event. News choppers have become almost as ubiquitous as gnats.

The documentary Whirlybird rotates around the L.A. couple who pioneered helicopter news coverage in the United States, Bob Tur (now known as Zoey Tur) and wife Marika Gerrard. They took to the skies in the early 1980s, and were the first to televise a high-speed freeway pursuit.

The Turs also fluttered above the intersection of Florence and Normandie as the L.A. Uprising exploded in 1992, and captured the devastating footage of truck driver Reginald Denny as he endured a near-fatal beating. And when O.J. Simpson fled L.A. police in a white Ford Bronco after failing to surrender himself on murder charges in 1994, there were the Turs, buzzing beside the slow-speed chase in their helicopter.

Whirlybird, which played as part of Deadline’s For The Love of Docs series, was directed by L.A. native Matt Yoka. During a panel discussion, Yoka explained that he initially intended to make a more general film about his city, before he zeroed in on one particular theme.

“I became interested in the unique phenomenon of helicopter reporting in Los Angeles,” Yoka said, adding that as any reporter, journalist or documentarian might do, he began trying to identify, “Who’s the ‘most’ of that subject that you’re looking for. And that was Zoey Tur. Just reading her resume was like the greatest hits of the worst things that happened in Los Angeles for about 20 years, and she was at the center of it.”

The Turs divorced in 2003 after more than two decades of marriage (they have two children, a son James, who is a physician, and a daughter, Katy Tur, a reporter and anchor for NBC News and MSNBC). In 2013 Zoey publicly came out as transgender, long after her career as a helicopter news reporter had ended.

“When I came [on board] Matt had shaped the film into this amazing document. He culled through 6,000 hours of footage that the Turs had in a storage locker and the amount of work that he had done at that point was really amazing,” James said. “I came in because I myself am transgender. And we just wanted to make sure that this story was told in a way that covered transgender issues sensitively and also looked at the family dynamics and the personal side of it and made sure that everybody was represented fairly.”

“It wasn’t just about making sure that I didn’t do something or that the film wasn’t offensive,” Yoka added. “It was about really kind of making these characters three-dimensional… A lot of the complexity and nuance really comes from a lot of conversations that Andrea and I had during the filmmaking process.”

The film doesn’t avoid some of Zoey’s questionable behavior back when she was Bob. She could be mercilessly critical of Marika as they worked in breaking news situations, exhibiting what might be called a toxic stew of adrenaline and testosterone.

“I think a lot of transgender people put themselves in a gender hell of their own making,” James observed. “And I think in the case of Zoey, she tried everything she could to avoid dealing with her feelings about her gender identity. And that manifested in many toxic ways.”

James continued, “One of the things that I love about this film is that Matt hasn’t shied away from the controversies–some of the ethical questions about their footage, some of the issues around gender and other issues that have come up in recent years that are sort of roiling the country. And so that’s why it feels very timely, even though it’s footage from decades ago.”

Watch the conversation about Whirlybird in the video above. For The Love of Docs is sponsored by National Geographic.