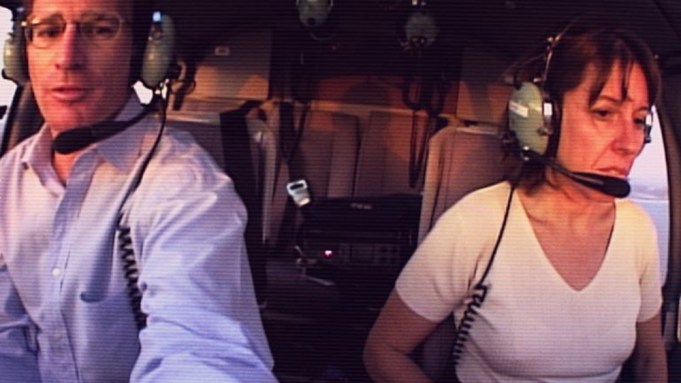 EXCLUSIVE: Here’s the first look a Matt Yoka’s Whirlybird, which has its world premiere in the U.S. Documentary Competition at the Sundance Film Festival on Sunday. The A&E Indiefilms feature film follows Zoey Tur and her then-wife Marika Gerrard, who helped create breaking news reporting in Los Angeles in the 1980s and ’90s with their work both on the ground and in the air.

Loaded with footage from the seminal Los Angeles moments the pair brought to the world — from the 1992 riots to the O.J. Simpson slow-speed freeway chase — the docu is also an L.A. story of a family in turbulence, reporting on a city on the edge.

“Breaking news was really in its infancy,” says Zoey, who was known as Bob then before coming out as transgender (one of her children with Marika is NBC News reporter/anchor Katie Tur). “Video gave you immediacy, so you had to get to the scene, get your information, get your interviews. Seconds mattered – everybody was like this. It wasn’t just me. You gotta get it on the air before the other station gets it on the air.”

The documentary also details the toll that life took on the family, and includes interviews with their children. “This husband-and-wife relationship of a helicopter reporting duo is where I ultimately discovered the core of the film,” Yoka said. “The wildly epic and ultimately heartbreaking story of Zoey and Marika’s marriage was something distinctly human, with universal themes that extended beyond the city limits.”

The pic is produced by Diane Becker and hails from Fishbowl Films, Submarine Entertainment, World of Wonder, Different By Design and Steady Orbits. Its first screening is Sunday at 2:30 PM local time at The MARC Theatre.