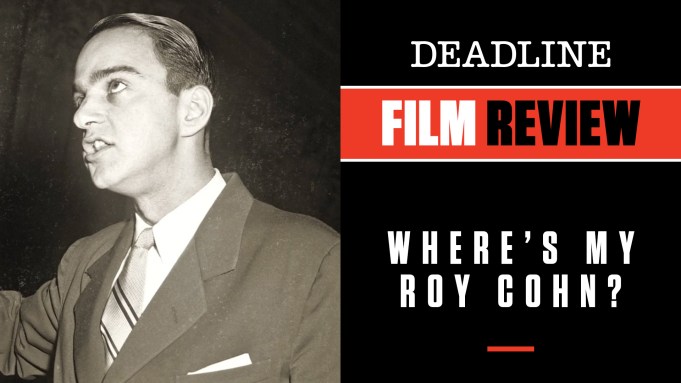 “Power in the hands of someone that reckless and arrogant is a dangerous thing.” So says the last interviewee at the end of Where’s My Roy Cohn?, Matt Tyrnauer’s fascinating and timely new documentary on the life of infamous and, many say, evil New York lawyer Roy Cohn. He’s the man known for serving as Chief Counsel of the Army-McCarthy hearings of the 1950s; his ties to crime figures like John Gotti; and most notably now his uncanny influence on and mentorship of Donald Trump, for whom he was a personal lawyer in the ’70s and ’80s.

Ruthless, unethical, corrupt, reckless, quintessential fixer, arrogant, demagogue, unscrupulous, notorious, evil, liar — those are just some of the words thrown about by interviewees in this pertinent docu to describe the subject on whom Tyrnauer has pointed his laser-sharp focus. “If you were in his presence, you knew you were in the presence of evil,” reads the ad line for the movie Sony Pictures Classics puts in theaters this week.

The director does a comprehensive job of digging deep into the background and psyche of a man who rose to be feared among rivals. He was friends with Richard Nixon, Ronald and Nancy Reagan and Barbara Walters, among others, and a complete contradiction with the people he defended and the private life he led, hiding his homosexuality to his death bed in 1986, when he passed away due to complications of AIDS. He was 59 and still deep in the closet, a man whose motto was “deny, deny, deny.” He would live a life promoting the idea of never apologizing for anything and attacking anyone in his way.

As Gore Vidal confronts him in one of the many vintage TV interviews in the film, points out Cohn’s modus operandi is to instantly change the subject when a question comes up he doesn’t want to answer, and then so thoroughly muddy the waters that you can’t remember what was asked in the first place. Basically he would just throw a bomb onto the fire. It appears Donald Trump was a very good student.

If all this sounds familiar, it is because the film paints in no uncertain terms Cohn’s undeniable influence on Trump, who stood up for him even when his checkered past caught up to him and he was disbarred five weeks before his death. The title of the film, Where’s My Roy Cohn? actually comes from a quote of Trump’s shortly after he was elected and frustrated by some of the investigations against him. Much of the latter part of the film is devoted to the relationship between the two men, the rise of Trump as a NYC real estate magnate with Cohn’s help and the corrupt dealings during the building of Trump Tower. Certainly the director does not shy from showing the deep influence of Cohn on the current occupant of the White House, perhaps Cohn’s greatest achievement — even if Trump’s election came three decades after his death. The film shows the power of a man whose lack of empathy and cutthroat ways still live on from beyond the grave. An end title card notes, however, that Trump did not respond to invitations to be interviewed for this film despite repeated requests.

Tyrnauer is blessed to have a wealth of archival footage to play with, including much from the televised communist witch hunt perpetrated by Sen. Joseph McCarthy and Cohn in the Army-McCarthy hearings that destroyed so many lives. But there is so much more here, including the unique and lasting relationship Cohn had with his mother, with whom he lived until her death. One macabre sequence that details a Passover Seder tells you everything you need to know about her. A 60 Minutes interview with an inquisitive Mike Wallace is particularly eye-opening and used effectively. Lorne Balfe’s overbearing musical score is heavy handed and sometimes gets in the way of a story that doesn’t need that much punctuation to get its points across.

This is just remarkable stuff to see all together in one place, adding up to a portrait of a man who did not stand for the better side of humanity but one whose philosophy is frighteningly more alive now than even when he walked this Earth. As a document of a pit bull who took no prisoners in his own time, and now seemingly sets much of the agenda for our time, Where’s My Roy Cohn? is a must-see. Watch my video review of the movie at the link above with scenes from the film.

Do you plan to see Where’s My Roy Cohn? Let us know what you think.