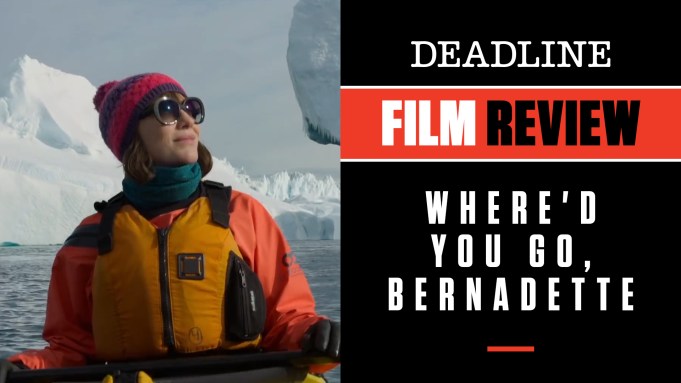 Take a major 2012 best seller, add in a top director, and then get a two-time Oscar-winning actress to star. Sound like the recipe for a surefire awards contender, or at the very least a must-see movie? You bet, but Where’d You Go, Bernadette doesn’t quite measure up to those expectations, despite a game performance from the incandescent Cate Blanchett, who clearly is the best reason to see this movie.

I wish I could give this more of a ringing endorsement since original films getting a wide release like this one (2,500 screens) are few and far between in the summer, and in my opinion a chance to see Blanchett in a full-blooded leading role is one not to be passed up. That is why I am saying this one is “go” for Blanchett fans and completists, but others in the audience might be put off by the cranky manner of the star’s character — an unhappy woman whose potential for creative greatness seems to have slipped away from her. She was a legendary, award-winning architect but hasn’t done anything since her heyday two decades ago. She certainly loves her family, including husband Elgie (Billy Crudup), a Microsoft tech wizard, and brainy daughter Bee (Emma Nelson), but snaps at everyone else and seems miserable in her current life in rainy Seattle in a dilapidated old mansion.

She constantly is barking thoughts and orders into a recorder, apparently for an assistant. There’s a weird plot excursion with that, but the gist of it all is this woman who mostly hides under large dark glasses (a la Anna Wintour) is in a downward spiral. We eventually get reasons for that, but suffice to say the burden of being blessed with extraordinary creative talent can take its personal and emotional toll.

This is not a protagonist audiences can easily warm up to, but in Blanchett’s hands we never look away. A scene with a neighbor well-played by Kristen Wiig is a highlight, as Wiig basically wigs out on Bernadette, blaming her for the mudslide that comes pouring down straight from Bernadette’s into her living room — right in the middle of a party, no less. These are things and people Bernadette Fox simply does not want to deal with. She is more into an idea of a family trip to Antarctica that Bee proposes. It becomes the thrust of the film’s final act in an intriguing way that is teased in the movie’s first scene where we see Bernadette kayaking alone in the icy landscape of the most remote place on Earth before her story heads into flashback. To say she is eccentric doesn’t begin to describe her, and Blanchett is simply too good an actress to ever make it that easy. It is a performance well worth seeing in a movie that wouldn’t be too memorable without it.

Director Richard Linklater, along with co-writers Holly Gent and Vincent Palmo Jr., does a nice job navigating all this material since the Maria Semple book was not written in a way that lends itself to movie convention. Whether the legions of readers who loved the novel will like the liberties taken in bringing it to the screen is a question to be answered, but Linklater — a multiple Oscar nominee himself for masterful films including Boyhood, the Before Sunset trilogy and others, gives it a good, if not completely successful, try.

The supporting cast, which also features Judy Greer, Steve Zahn, Laurence Fishburne and Kate Burton, is well-chosen and adds immeasurably, but this is Blanchett’s movie start to finish and she runs with it. It is all about a brilliant woman on a voyage of rediscovery, the title a reference to finding again in herself what has been lost.

Producers are Megan Ellison, Nina Jacobsen, Brad Simpson and Ginger Sledge. United Artists Releasing and Annapurna open it wide today. Check out my video review above which also features scenes from the movie.

Do you plan to see Where’d You Go, Bernadette? Let us know what you think.