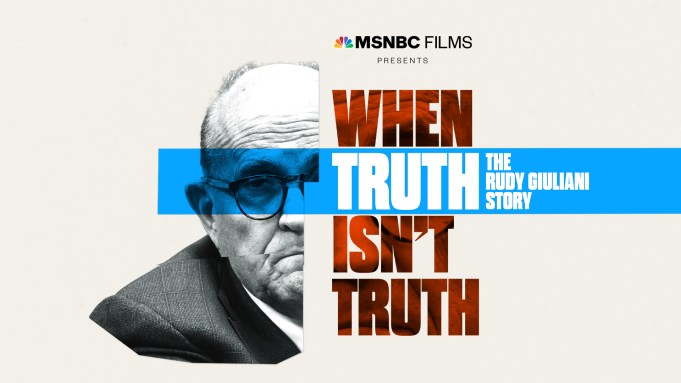 EXCLUSIVE: How do you go from a highly respected political figure to a subject of controversy and ridicule, with rivulets of hair dye dripping down your temples?

MSNBC explores that question in When Truth Isn’t Truth: The Rudy Giuliani Story, a documentary series that debuts on the network next month. The four-part series, produced by MSNBC Films and TIME Studios, “delivers an unvarnished and unflinching look at the complicated and controversial Rudolph Giuliani,” according to a release. “Each episode focuses on an essential chapter in the Giuliani story: through the U.S. Justice Department to New York City politics…through the indelible events of 9/11 that cast Giuliani as ‘America’s Mayor,’ his post-Mayoral odyssey as a high-priced consultant, and eventually to the inner circle of Donald Trump.”

MSNBC Films adds, “Through unprecedented access to the aides, allies, enemies, friends, and family who witnessed every twist and turn of his life and career, we deliver a story of power, of greed, of palace intrigue and of one man’s unprecedented rise to dominance and subsequent fall from grace. Some love Rudy and see him as a fighter for truth. Others revile Rudy and see him as a force for the destruction of a common set of facts and truths in America. But, no matter how you feel- this is Rudy, as you’ve never seen him before.”

Episode 1 of the series premieres on Sunday, February 19 at 10 p.m. ET, and becomes available to stream the following day on the Peacock platform. In the exclusive trailer above, former New York Governor Eliot Spitzer says of Giuliani, “He was tough,” while another observer describes him as “a very ambitious guy.” Prominent Democratic Congressman Jamie Raskin comments, “People say, ‘What happened to Rudy Giuliani? He was such a hero.”

Giuliani’s law license in New York has been suspended and he faces potential sanctions from the Washington DC Board on Professional Responsibility for making false election fraud claims in support of President Trump’s efforts to overturn the results of the 2020 election. He’s a defendant in separate lawsuits brought by two voting machine companies — Dominion and Smartmatic – that allege he and others falsely accused the companies of rigging the 2020 election. And according to an April 2022 report by the New York Times, prosecutors in Georgia have told Giuliani he is “a target in a wide-ranging criminal investigation into election interference in Georgia,” associated with his time serving as President Trump’s attorney.

Watch the trailer for When Truth Isn’t Truth: The Rudy Giuliani Story above.