Continue to Deadline SKIP AD
You will be redirected back to your article in seconds
Skip to main content
February 12, 2021 5:23pm 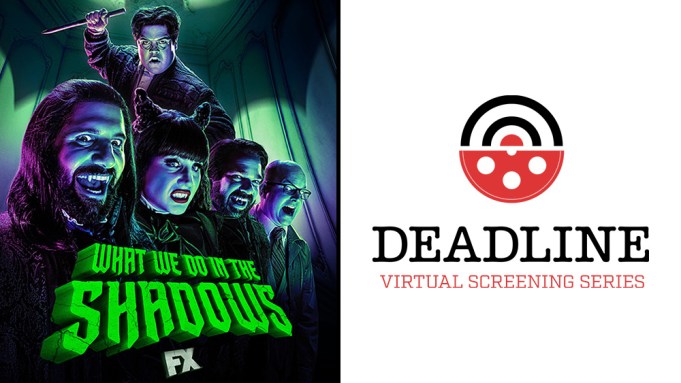 What We Do In The Shadows , the wild and wacky FX comedy series about a bunch of vampire roommates has just been nominated for 5 Critcs Choice Awards including Best Comedy Series.  That is coming off a whopping 8 Emmy Nominations for season two of the show, one that is quickly becoming a must-see cult smash. I was joined by Executive Producer/Showrunner/Writer Paul Simms at a Deadline Virtual Screening Series  screening Thursday night of the finale episode of season two and a hilarious conversation following with him and  several castmates including  Kayvan Novak (Nandor); Matt Berry (Laszlo); Natasia Demetriou (Nadja); Harvey Guillen (Guillermo); and  Mark Proksch (Colin Robinson). When we talked they were all into week one of quarantining in advance of starting to shoot season three in Toronto.

“Feels like it’s been about a month so far, but I think it’s only been a week, but we have a solid plan (about making the show with Covid restrictions) , and it might slow down our shooting a little bit. Some people have said they we definitely prepared this season more than we usually do, knowing that things can’t go as fast and at such a break-neck speed, but I don’t know yet. I mean, I know the work will be good. It’s just a matter of how long it’ll take,” Simms said about the upcoming season of a show that looks like it can run forever.

It is based on the movie by Jemaine Clement and Taika Waititi, and Clement created the TV version while Waititi has an EP credit. The small screen version though has taken on a life of its own and clearly is catching on with every season that goes by. Clement and Waititi however made it clear they did not want it to be about them as Simms told me when he signed on. “The said ‘we want to do it again, but we don’t want to be in it’, and I was like, well, that’s what made the movie so funny, but then, when we found this great cast, it became sort of a thing of its own. I mean, to use comic book talk, it’s the same universe, but a whole new cast of vampires, and within that, maintaining the same sensibility of the movie, and then, as the series has progressed, sort of branching out farther and sort of just accidentally becoming our own thing sort of,” he said.

There is eager anticipation for the next 10 episodes being shot now, but Simms didn’t tell me many details  when I tried to pry it out of him. “Well, without giving too much away, yes, obviously, season two ended with not only Guillermo slaying lots of important vampires, but the vampires he lives with, our regular characters now, knowing that he’s formerly a secret vampire slayer, and now they know about it, and yeah, we pick up very directly. We’ve had table reads of 9 of the 10 scripts now, so they know everything. So they could blow every secret if they wanted to, but I think they’ll just give you little hints and teases and tidbits,” he said.  I did ask if the pandemic itself is directly affecting the creative direction of the series.

“It hasn’t affected the style of the show. I mean, writing wise, we try to stay away from situations where we had big group scenes. I don’t think we would’ve done the finale scene that you just saw during the pandemic because it required so many other people, but we also went into this season very conscious of not wanting to let the pandemic narrow our ambitions and just, you know, keep it all in the house, ” he explained, adding they have some fantastic sets and set pieces planned going forward.

Each of the actors talked about some of their past favorite scenes to play, the trajectory of their characters, as well as just the pure fun of being in a hit comedy series that seems to be growing in popularity within the industry and with viewers by leaps and bounds.  To watch a portion of our conversation just click on the video link at the top of this post.