Netflix's Ted Sarandos To HFPA: “We’re Stopping Any Activities With Your Organization Until More Meaningful Changes Are Made"
Read the full story
August 17, 2020 1:41pm
2Comments 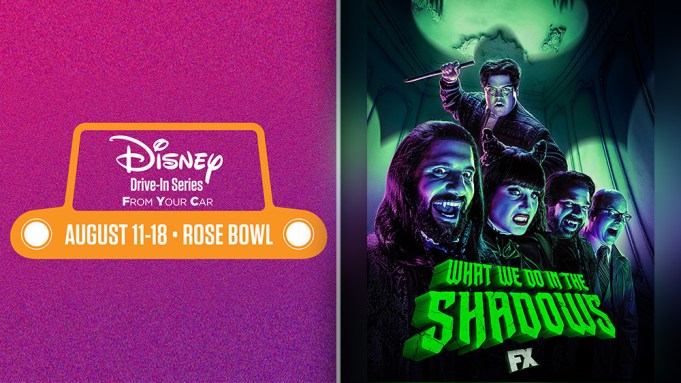 In bringing fresh new, uh, “blood” to this year’s Emmy Awards race, FX’s second-season comedy series What We Do in the Shadows is a real breakout, landing eight nominations including one in the marquee Outstanding Comedy Series race, as well as three — count ’em, three — for Outstanding Writing in a Comedy Series. Last year the show only received two craft nods, so clearly it is catching on with the industry in a big way.

I was joined over the weekend by five key cast members, as well as producer-writers Paul Simms and Stefani Robinson, when they all appeared for an extensive Q&A following the screening of two Emmy-nominated episodes of the show at the live Disney Drive-In Series presented by Deadline at the Rose Bowl in Pasadena. The panel was just as funny as the show, and began with Simms telling how the series morphed from the 2014 independent film of the same name that was written, directed by and starred Jemaine Clement and Taika Waititi, who both retain executive producer credits for the series.

That certainly was evident at the Rose Bowl event as the cast described how they approach their characters and created the chemistry of a group of vampires who are forced to live together in a ramshackle mansion. Joining in the conversation were Kayvan Novak (Nandor), Matt Berry (Laszlo), Natasia Demetriou (Nadja), Harvey Guillen (Guillermo) and Mark Proksch (Colin Robinson). Each beamed in from different parts of the country and the world for our virtual chat (Guillen even made in an in-person appearance since it was safe to come at night to a drive-in). You can certainly tell they all have a lot to do with the comedic success of their characters, in many ways improvising off the scripts, a fact Simms confirmed.

“Well there’s tons of improv actually. Once everyone understands what the point of the scene is or the story is it’s pretty much…I wouldn’t say a free-for-all because these actors also are very good at listening to each other. So it’s not that kind of fake improv that a lot of people do these days where there’s a writer just off screen saying say that, try that, do that,” he said. “There’s really things that develop into whole little flourishes that develop and by the time we get to editing, I often can’t remember what we wrote and what they came up with, which is very fun and satisfying.” Simms also gave props to the special effects wizards who pull off a lot of the “magic” with little actual CGI trickery.

Robinson also described the manic nature of shooting and the wild production design that adds so much to the show’s look and energ.

“It’s a pretty insane set. It’s almost like walking into something like The Haunted Mansion at Disney World or Disneyland,” she said. “It’s so intricate. All those room, for the most part, are connected. But I mean just down to the details, the bookshelves and opening drawers that are just filled with things, the paintings, the portraits, those sort of knickknacks and skeletons that are all around the house.” She added: “The art department and Kate Bunch, our production designer, does such a great job of making that stuff feel so real and lived in and it’s like stepping into another world, but I think in that way it just makes the experience so much more satisfying knowing that when you do see things in the house that they are totally interactable and people can come in and out in ways that feel natural and we’re not laboring over who’s there and how they’re existing in this space. I mean it does feel very lived in, in that way, which really helps the writing, I think.”

During the pre-show, some of the PSAs filmed by the actors in order to warm up the crowd for the main event were also shown. To watch select excerpts from our 40-minute conversation, click on the video above.