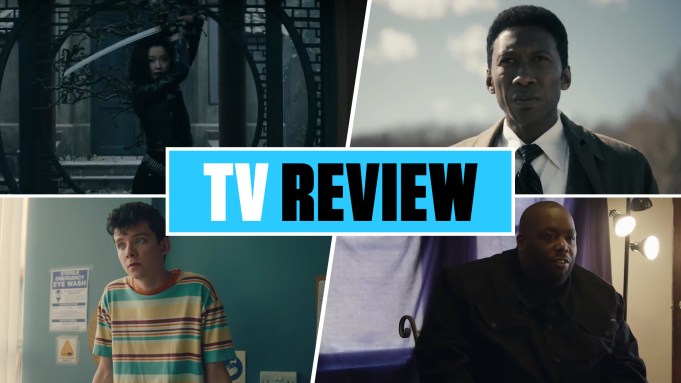 Awards season has truly kicked off and Sundance is just around the snowy corner, but on the small screen midseason debuts are popping up almost every night. It’s plenty reason to weigh in on what show you just can’t miss this week.

Also of note is The Passage, which Fox is bringing to the premiere party on January 14, but the cliché hobbled vampire drama really isn’t much fun or very interesting despite its obvious ambitions. Drawing from Justin Cronin’s trilogy of novels, the Liz Heldens EP’d series has morally compromised scientists with short sighted aims, teenage runaway as it moral conscience and a growing group of very bad people now transformed into very very bad creatures of the night, though they are never actually called vampires in the episodes that I saw. In summation, The Passage is a bit of a road to nowhere.

Imported from the UK and with more than a little of the DNA of The End of the F***ing World, the Ncuti Gatwa and Emma Mackey co-starrer Sex Education, about a high schooler putting his mother’s expertise to work explicitly among his peers, certainly wants to have some skin in the coming of age game.

As a community activist, entrepreneur and member of spare-no-prisoners hip-hop duo Run the Jewels, Killer Mike is all about speaking truth to power. However, while Killer Mike is a refreshing straight shooter onstage and as a talking head on CNN and elsewhere, his new six-part Netflix series Trigger Warning feels like it wafted over half-baked from Viceland with the social experiment munchies.

Despite Lilliputian scripts and a distracting Stephen Dorff who is woefully miscast, the towering talent of Ali almost straightens out the third season of True Detective from its ultimately dull centrifugal swirl. Yet, the Oscar winner and more recently Golden Globe-winning Green Book star and the resurrected case of a missing child is overwhelmed by the Nic Pizzolatto-created HBO series’ capricious leaps in time and thinly spread philosophical space.

After a premiere at New York Comic-Con last fall, Syfy sprung the Deadly Class pilot online late last year. It was a smart move and some swift PR by Syfy for the skillful, quite incorrigible and surprisingly emotionally resonating drama exec produced by the Russo Brothers that may have otherwise been overlooked because of its place on the dial and seemingly genre-specific tone.

With a deep bench ensemble that includes Benjamin Wadsworth as elite King’s Dominion academy newbie Marcus, now borderline superstar All The Boys I’ve Loved Before lead Lana Condor, Marvel regular Benedict Wong, plus María Gabriela de Faría, Luke Tennie, Liam James, and Michel Duval, co-showrunners Remender, Miles Orion Feldsott and Mick Betancourt have crafted a tale for the ages – even more so with all those killer 1980s tunes on the well-manicured soundtrack on what is much more than Hogwarts for the Hellbound

So, if you want to manicure your TV viewing over the next week, click on video above to see more of what’s the best of the best.