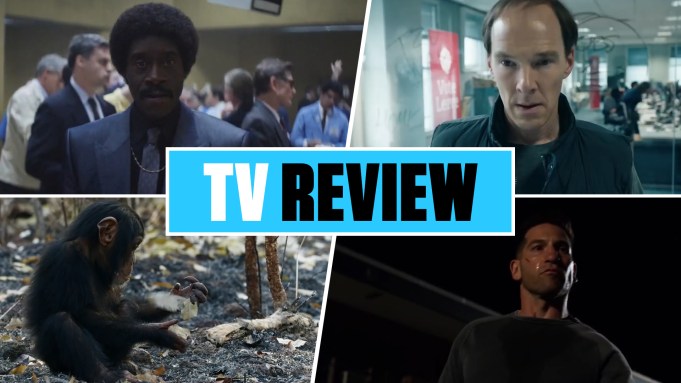 As today’s devastating Brexit defeat for Theresa May in the British Parliament proves, fact can be as much of a drama as fiction.

In fact, it is reality of sorts that makes up most of the cream of the small screen crop for the latest the show to watch this week. For instance, there is the January 19 debuting Benedict Cumberbatch starring Brexit movie on HBO about the man behind the campaign that has brought political chaos to the UK.

The same day, BBC America hosts the premiere of the endangered animal kingdom-based Dynasties while on January 20, Don Cheadle returns to Showtime with the 1987 set comedy Black Monday. In pure Marvel mode, Jon Berthnal led The Punisher returns for a second bloody season on Netflix on January 18.

You’ll have to check out the video above to see exactly which one of the four shows is the one you have to watch this week.

Having already played on the other side of the pond last week, the Toby Haynes directed and James Graham penned Brexit may be a bit too frothy in part, but it is literally timeliness personified. Also starring Cumberbatch’s fellow The Imitation Game alum Rory Kinnear as well as The Crown’s Oliver Maltman, the premium cabler movie probes into the mind and methods of Vote Leave strategist Dominic Cummings, played with full eccentricity and follicle challenges by the Emmy winning Sherlock actor.

As one of only two Marvel series now on Netflix following the cancelations of Iron Fist, Luke Cage and Daredevil and launching the same day as Season 5 of Grace & Frankie, The Punisher has its finger relentless on the trigger for its second season. Even with a now scarred Ben Barnes back and new additions in the forms of Giorgia Whigham as a mysterious teen sidekick of sorts for the ex-Walking Dead actor’s often ruthless Frank Castle, L.A. Law and American Gods’ Corbin Bersen and a fundamentally cold new villain in Josh Stewart, the sheer vigilantism and body count never wavers.

Wavering is the ability of several species to survive, as the perpetually passionate David Attenborough hosted Dynasties makes very clear in its five-part series that starts on Saturday. The exquisitely depicted BBC Studios Natural History Unit production, co-produced with BBC America, Tencent Penguin Pictures, CCTV9 and France Télévisions will mark a big leap for BBC America as it simulcasts with AMC, IFC and Sundance TV for each episode.

A big leap or fall is but one of many moves in the Seth Rogen and Evan Goldberg executive produced Showtime series Black Money featuring House of Lies lead Don Cheadle back on the premium cabler. Having already previewed the pilot online, the Jordan Cahan and David Caspe created comedy aims to reveal the supposed real reason behind the sudden and harsh Wall Street crash of October 19, 1987. In that effort, Black Monday takes a number of leaps of faith, financial and otherwise with Avengers alum and Oscar nominee Cheadle as the Lamborghini limousine riding head of a rogue trading firm and Regina Hall and Book of Mormon star Drew Rannells as his high funded lieutenants.

So, place your bets and click on the video above to see who is the show you just can’t miss this week – and that’s a fact.