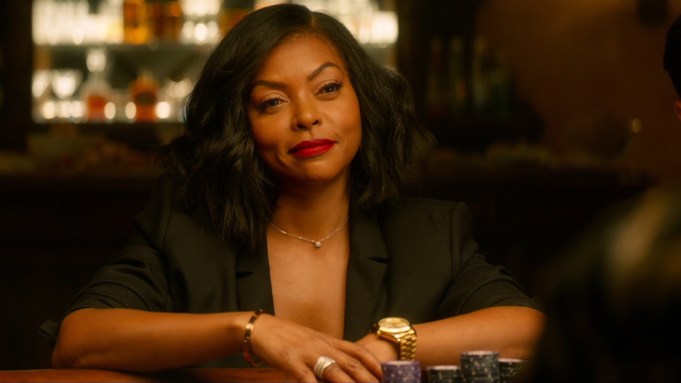 In 2000, Mel Gibson had one of his biggest commercial hits in the comedy What Women Want, in which a whack on the head suddenly allows him to hear women’s thoughts. The upside of that was the discovery that women were exceptionally smarter and better than men. Big shock, eh? Nancy Meyers directed that one. Now Adam Shankman directs Taraji P. Henson in a gender switch on the concept in the contemporary remake What Men Want, in which drinking some dicey tea also leads to problems when she suddenly finds she can hear men’s thoughts. Turns out most of those thoughts are not pretty. Bigger shock, eh?

Henson plays Ali Davis, a sports agent in a male-dominated office where she clearly is the superior talent but can’t catch a break in getting the promotion she so deserves because she is a woman. After visiting a loony psychic (Erykah Badu), she gets some mysterious tea that leads to the incident in which she is knocked out and finds she has the creepy ability to hear all men’s thoughts. This is first discovered in the car with her nerdy assistant Brandon (a hilarious Josh Brener) but soon spreads to her entire office of scheming, not-too-upstanding guys, and a new romance with bartender Will (Aldis Hodge) who also has a 6-year-old son Ben (Auston Jon Moore), a situation that comes in handy later as she tries to land a prize client, basketball star Jamal Barry (Shane Paul McGhie).

Turns out Jamal’s father (the always welcome Tracy Morgan) does not want his son to sign with anyone who isn’t a family person, so Ali covertly lures Will and Ben into situations where she can pass them off as her own family in order to help seal the deal. This causes eventual complications all around.

The gimmick of hearing what men are actually thinking is milked to the extreme, but even as the movie threatens to go over the top, this talented cast rescues it every time. Henson acquits herself well in probably her most blatantly comedic role to date, and bedroom scenes with Hodge are roaringly funny due to her extroverted sexual antics and his shocked reactions. Brener as the unassuming assistant who longs to be an agent himself is perfectly cast, as is Morgan. However, it is Badu who steals this movie lock, stock and barrel in a comedy turn that looks like it might have been improvised (stay for the end credits for all the outtakes of her scenes, which are just as funny as the stuff they used). Who knew, despite a handful of earlier acting credits, that this brilliant singer also had this ability to deliver the laughs? SNL‘s Pete Davidson also shows up in an uncredited role as an office worker who falls for Brandon in a subplot that amounts to zilch.

Not everything in the script from Tina Gordon, Peter Hyuck and Alex Gregory lands with the desired effect, and Shankman’s frenetic direction is no match for Meyers’ stylish handling of the Gibson original. But in a world starved for laughs and a good time these days, What Men Want is a nice way to kill a couple of hours. I highly recommend seeing this in a theater — the laughter is contagious and that communal experience makes this one really fun, and that may also make What Men Want just what moviegoers want, too, right about now. Producers are Will Packer and James Lopez. Paramount opens it Friday.

Check out my video review above with scenes from the film. Do you plan to see What Men Want? Let us know what you think.