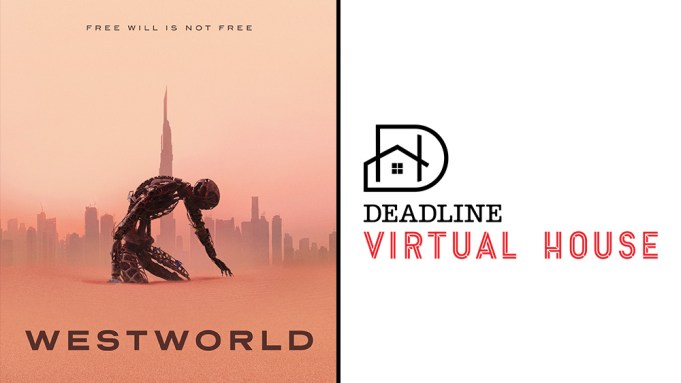 The androids have escaped and they are coming for humanity in Season 3 of the futuristic HBO series Westworld. That plot development, which posed major new challenges for the production team and stars of the show, has resulted in 11 Emmy nominations. Joining me for a deep dive into the making of the season For our Deadline Virtual House event were two of its Emmy-winning (and now nominated again) stars: Thandie Newton, who took Outstanding Supporting Actress in a Drama Series in 2018, and is once again contending in that category this year; and Jeffrey Wright, nominated three years in a row as Outstanding Supporting Actor in a Drama Series, and a past Emmy winner for his unforgettable performance in Angels In America.

But first I went behind the scenes for a fascinating conversation with three more of this year’s Emmy-nominated Westworld craft wizards: cinematographer Paul Cameron (who also directed one of the episodes), production designer Howard Cummings and visual effects supervisor Jay Worth.

Cummings started things off describing the challenges of creating a new setting, in 2058 Los Angeles, without bringing to mind the memory of Blade Runner among other things.

“Well, my marching orders from Jonah Nolan, who’s our creator and showrunner, along with Lisa Joy, his partner in crime, and we’ve been talking about this since Season 2 because we knew that the robots were going to go crazy and they were going to get out, and so, we eventually would see this world,” he said. “It was very important in the storytelling that this not be…I mean, honestly, Jonah loves Blade Runner, everybody does, but he said this isn’t dystopian. That’s dystopian. We need to create a new world where there seems to be order.

“There seems to be that they’ve conquered things like global warming, and people seem to have jobs, and there seems to be a universality to wealth and people have really good lives, and of course, which is the setup for the fact that Dolores is going to come in and screw it all up because she’s going to find a linchpin and pull it and watch the world crumble. So I guess our cautionary tale is the world of AI and do we rely on it or do we protect ourselves?”

Worth remembers having initial discussions five years ago, just coming off the film Interstellar, and preparing from that moment for the inevitability of the androids invading a new space. “Yes. Exactly. Well, it was one of those things that when we read the first few episodes and we saw that we had these personal aircraft that we knew we were going to be utilizing LED technology in some way, shape, or form,” he said. “And we had talked about this for years. I mean, Jonah had tasked me in 2015 with figuring out, we just came off Interstellar, and I got this idea of putting the sensor on the camera and building the supercomputer and having unreal and having real-time rendering. Go figure it out. This was 2015 when that was just kind of starting.”

Cameron praises the teamwork between the departments in getting it to work smoothly. “Having worked together for a while, and certainly Jay and Howard have been more regulars on the show than I have, but it’s this process I call conceptualization,” he said. “So the beginning process is great because it’s just assimilating everything that we’re seeing. And then, you know, quite honestly, we take that and then ghost it, with Howard in the breakdown with the conceptual art, and Jay’s input on the conceptual art and pulling this world together — it creates just a perfect roadmap for me to kind of say, OK , these are the real locations we’re up against. This is the real lack of time we have to shoot these. I think it’s such an amazing team on Westworld that it’s just the way things happen, the way Howard makes things happen and Jay and every department that we have. It’s just everybody’s on point, and I think it does have to do with a shared vision. Just great.”

As for the actors, Newton it was as she says a bit head-spinning to see the direction of her character Maeve as she enters this new phase of the series. For a while she wasn’t sure. “What is going on? I mean, I know what’s going on, but for Maeve, she’s not anyone’s sidekick, or she doesn’t want to be in the world. She doesn’t want to be animated, at the end of Season 1. So, there’s a real kind of, I feel like her feet haven’t hit the ground yet, and I really enjoyed my work, in the first half of the season, where much like Season 1, she’s trying to figure out what’s going on,” she said. “She knows that there are truths that are being hidden from her, and she’s just trying to figure out the nature of her reality,.. Even though she discovered the daughter wasn’t real, the idea of her daughter was real, and it’s about personal desire for liberation to end it, really. Kind of suicide, and so, to find the character being drawn back into the story, there’s a resistance in Maeve. She doesn’t want to be there, and I’m really curious to see if she ever does want to be there, and what that will bring.”

For Wright, he still enjoys being the one character, Bernard, who really is a representative for all of us as we traverse this landscape. “So, Bernard is and has been from the start, somewhat of a detective, somewhat of eyes for the audience — as you know, we kind of weave through a series of discoveries that need to be processed, and understood, and so, of course, as he does that, he begins to understand things about himself, as well, and so, it’s a journey inward, too, and as he goes out into the world, that continues in Season 3,” Wright said. “One of the key themes is this theme of freedom, what it means for we, for us, the hosts, what it means for humans, in the ways in which our ideas of freedom overlap or don’t, and I think that’s a hugely relevant topic to discuss, now, relative to our relationship to technology, in the quote unquote real world, and the ways in which we perceive ourselves to be free, when in fact, we might be more and more enslaved, by you know, certain hormones, and certain manipulation of algorithms, but particularly manipulation of the value that can be derived from our tension, and from our behaviors.”

It is all heady, wildly entertaining and thought-provoking. Check out the conversation in the video above.