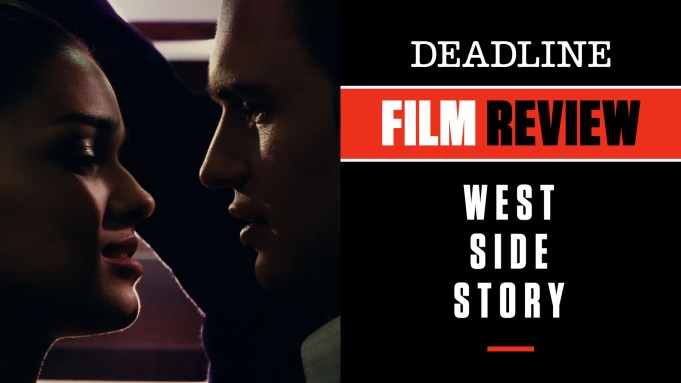 In his long and storied career, Steven Spielberg never has ventured into the musical genre but always has wanted to give it a try. So now, nearly half a century after his first feature film, he finally can check off that box with his stirring — and, dare I say — necessary take on a true American theater and film classic, West Side Story.

It might sound like a fool’s errand to do a new film version of a movie that remains the most honored musical in the history of the Academy Awards, but this is Spielberg, and it is clear he has real admiration and respect for what Robert Wise and Jerome Robbins achieved with the 1961 film that won 10 Oscars but also a kind of keen sense of the moment in which to spring a new version on the world. Being a huge fan of Wise’s movie, I had to prepare myself for a new one that might just go its own way.

Spielberg got immense contributions from Pulitzer Prize-winning screenwriter and sometimes collaborator Tony Kushner (Munich, Lincoln). Why they’ve succeeded as well as they have here is simple: They realize the core message of West Side Story is that in world racked by racism, nativism, impossible division, poverty and a lack of hope, there is still the possibility that maybe, just maybe, love can prevail.

The original 1957 Broadway production — Leonard Bernstein wrote the music, Stephen Sondheim penned the lyrics, Jerome Robbins choreographed and Arthur Laurents wrote the book — conceived of this as a modern Romeo and Juliet set against the gang wars of the white Jets and the Puerto Rican Sharks in an-ever changing environment and gentrification on New York City’s West Side. Although it has been revived and performed on stages from Broadway to high schools ever since, it is that 1961 movie that made it immortal, a vividly colored musical drama that took the world by storm when it debuted on screens exactly 60 years ago.

Among its stars were Natalie Wood as Maria, an actress not of Latino descent whose songs were dubbed, and George Chakiris, who took a Supporting Oscar as Sharks leader Bernardo, even though he is of Greek descent. Of course there was also Rita Moreno as Anita, who did become the first Latina to win an Oscar and warmly provides a connection between the 1961 and 2021 versions by playing a new character in the story. Spielberg was determined to make every Latinx character performed by Latinx actors, a key change from Wise’s movie. Thus we have Rachel Zegler making her movie debut as Maria, straight out of high school and delivering a heartfelt and convincing turn as the young woman who falls in love with Tony, a key Jet just out of prison and looking to turn his life around. Ansel Elgort effectively plays him, and sings beautifully, as the pair of young lovers try to overcome the ethnic differences and environment that threatens to keep them apart.

The tone of Kushner’s script, which also reorders the songs and action in smart ways, is set right at the start with a more mature-feeling musical prologue set to the decaying streets of an area that is being torn down, moving out the descendants of Eastern immigrants as well as the Puerto Rican population (this all happened in the ’50s to make way for the area Lincoln Center has taken over). Turf wars are standard, tensions simmering between the Jets, led by Riff (a truly sensational turn from Mike Faist), getting ready to “rumble” with the Sharks, both sides being disposed of by society and trying to find their own rhythms of life in changing times.

The musical always has had pertinence, but for me it has never seemed more vital than it does now in an era triggered by the xenophobic message of a toxic political era and a country burning with growing intolerance for our differences. The division between the Jets and the Sharks stands in here, ultimately leading to a plea for tolerance in the darkening world at large and a warning that it all might lead to tragic consequences if we don’t find our way out. With Kushner’s screenplay pushing this theme further than previous versions, it is all too apparent that this time around, West Side Story not only stands as a towering entertainment and musical masterpiece but one with real gravitas and urgency for today, even if Spielberg and company have not changed the ’50s era in which it always has been set. If a movie can make a difference I certainly hope it is this one, a story whose time has come again — and not a moment too soon.

It has been cast immaculately with Zegler, a real find with a lilting voice and fine dramatic talent, though I would say not quite a match for Wood’s fierce and moving work in that final scene that plays a little more rushed than in Wise’s film. Nevertheless, she is tremendously impressive, as is Elgort, who brings some real charm in Tony’s signature numbers like “Something’s Coming,” “Tonight” and the swooning “Maria,” which here even has welcome doses of humor added.

Anita is a powerhouse role for any actor, and Ariana DeBose, with vast experience in the theater and movie credits like The Prom, does the role proud even as she is literally in the shadow here of Moreno. And regarding the latter, her Valentina — who is the widow of Doc, proprietor of the drug store where Tony works and the Jets hang out — is an inspired addition (she is also an executive producer), and a surprising one as the creative team has found a way to hand Moreno a signature song from the score, “Somewhere”, and she delivers with real poignancy as it becomes a way to remember and honor her late husband. This is no mere cameo or casting stunt.

David Alvarez is a scrappy Bernardo, not as imposing as Chakiris but grittier, and he succeeds in making the role his own. But the real revelation of this cast is Faist, a  Tony nominee for Dear Evan Hansen who just pops and explodes as Riff. With this performance we are watching the birth of a true star, the kind of actor you can’t look away from. In fact, I felt a definite sense of loss once he is out of the picture. He’s riveting. Kudos to casting director Cindy Tolan, who met the criteria and challenge posed by Spielberg and certainly delivered.

Impressive too are Corey Stoll as the frustrated Lt. Schrank, Brian D’Arcy James as Officer Krupke (and that memorable song with updated lyrics), Josh Andres Rivera as Chino and the exceptional cast of Jets and Sharks.

Production-wise, as you might expect, this West Side Story is top notch, with appropriate desaturated cinematography from frequent Spielberg cameraman Janusz Kaminski, exceptional production design of Adam Stockhausen, the costumes, editing, sound — all of it. Tony winner Justin Peck’s fine and thrilling choreography is both a tribute to the template laid by Robbins and the need to make it brand-new again for audiences who are going to experience this landmark show for the first time. The immortal “Dance at the Gym” and particularly the staging of the rumble feel completely fresh and exciting.

And of course there is that music, with the score conducted by Gustavo Dudamel, arranged by David Newman and further contributions from Jeanine Tesori and Matt Sullivan. They have done the unforgettable music of Bernstein and Sondheim proud. Sadly Sondheim, who was quite involved in the production, passed away last week, just days before the premiere. He already had given the film his stamp of approval, so whatever awards are in the cards for those who made this film, that endorsement probably will be the prize most valued.

For Spielberg, finally a musical — one I initially was surprised to hear he felt the need to reimagine but one that comes alive as proof of its endurance and long-lasting worth. It’s also further evidence, if it ever was needed, of the gifts of a filmmaker who recognizes the greatness of those who came before him and finds a way to honor them by making it all seem like so new and important once again.

Producers are Spielberg, Kristie Macosko Krieger and Kevin McCollum. Disney is releasing the 20th Century Studios production on December 10. Check out my video review with scenes from the film by clicking on the link above.

Do you plan to see West Side Story? Let us know what you think.