Continue to Deadline SKIP AD
You will be redirected back to your article in seconds
Skip to main content
October 14, 2020 10:00am 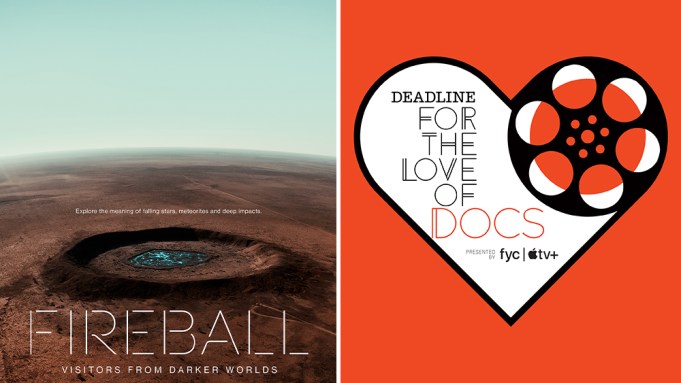 If you’ve ever wondered whether a giant asteroid could suddenly wipe us out like the dinosaurs and render all our 2020 worries meaningless, Werner Herzog’s latest documentary is definitely a must-see. Apple TV+’s Fireball: Visitors from Darker Worlds, which Werner co-directed with Cambridge University Professor of Volcanology Clive Oppenheimer, not only examines the likelihood (or lack thereof) of Earth’s obliteration, but also delves deep into the cultural, spiritual and scientific influence of asteroids, meteorites and shooting stars.

Speaking on a panel discussion for Deadline’s For the Love of Docs screening series, Oppenheimer—who previously worked with Herzog on volcano documentary Into the Inferno—said he was first inspired to approach Herzog with the idea for the film after visiting a lab in South Korea that reverently displayed meteorites.

“It put me in mind of the Black Stone that’s set in carbon in the Grand Mosque,” Oppenheimer said, “and it came to me as a topic that would follow on in a way (from Into the Inferno), a geoscience topic, that weaves together cultural elements and the nature and the sciences of these phenomena… It’s an extraordinary example of the veneration that people around the world and over time have held for celestial phenomena: comets, meteors and the stones that fall to earth.”

Herzog was immediately on board with the idea. “There was not a second of hesitation,” he said, citing the “immediate rapport” he had felt with Oppenheimer when they first met on the top of an active volcano in the Antarctic during the making of Herzog’s Encounters at the End of the World. And for Fireball, the duo travelled to a dozen different locations around the world, including the Torres Strait, the Papal summer residence, and back to Antarctica again.

With Oppenheimer in front of the camera and Herzog behind it, the latter also served as narrator, his voiceover providing that signature blend of insight and dry humor. At one point in the film, Herzog spontaneously steps out from behind the lens to point out to a scientist, “I am not made of stardust, I am Bavarian.”

The film’s tone is one of exploration rather than instruction, and this was fixed upon very early on, Herzog said. “Of course, it was instantly clear it should not be didactic. That’s why we hate school, that’s why we hate teachers. And we are filmmakers, so there’s a lot of humor in it, there’s a lot of wild stuff in it that you do not hear in regular documentaries. It’s wonderful to work like that.”

“It’s true that we never set out to make a conventional piece of reportage,” Oppenheimer added. “I think the quality of the film is that it’s much more something that you could experience over and over again. You could watch it again and make connections that hadn’t struck you the first time around, between the different elements.”