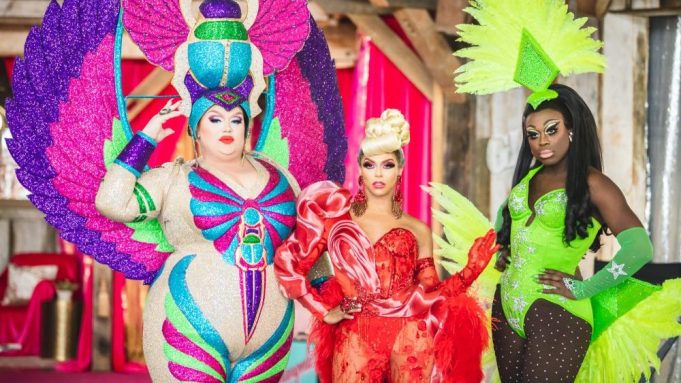 As HBO’s unscripted series We’re Here ends its inaugural season, it ushers in Pride month — and there isn’t a better way to do that than with celebrated drag queens Shangela, Eureka O’ Hara and Bob the Drag Queen. The gag-worthy queens traveled across the country and visited different small towns where they would adopt a “drag daughter” and give them a full-on drag makeover — but it isn’t your basic “makeover” show. The six-episode series shares seldom heard stories of acceptance, love, unity and support as we see their drag daughters step out of their comfort zone for a one-night-only drag show in their town.

The show was moving along fabulously but the coronavirus forced them to shut down production as they were in their final stop in Spartanburg, South Carolina– but that did not stop them from delivering a moving finale where we get to hear about their experiences as members of the LGBTQ community.

Deadline spoke with the RuPaul’s Drag Race alums-turned-drag superstars about their experience doing the show, how it exceeded their expectations and what it means to them that the finale is airing during Pride month — especially during a time when the world’s heart weighs heavy with the deaths of George Floyd, Breonna Taylor, Ahmaud Arbery and the police brutality against the Black community.

“Pride is a time, specifically to me, that is a lot about community,” said Shangela. “Even though this year we are not able to celebrate all together physically, it’s more important this year than ever to support each other and stand together.”

Shangela continued, “There are so many things out there to divide us. Pride has always been a way to come together and celebrate…and also remember that Pride was started out of protest. We have to be engaged, we have to be involved and informed in order to stand together and move forward…I hope that spirit carries us through the entire month — the entire year because child, we need it!”

Watch the interview above and the trailer below.