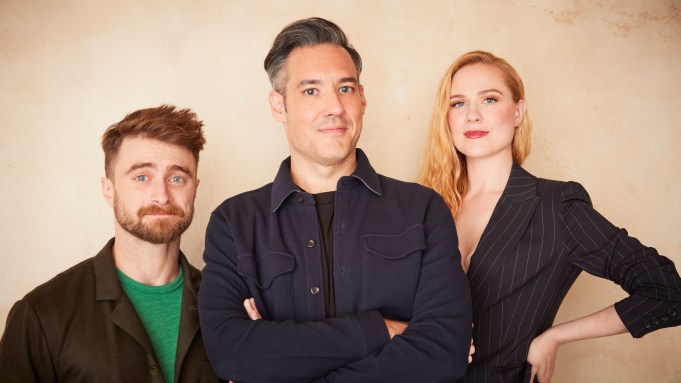 Being complete appropriate in paying homage to its subject, the Roku original movie Weird: The Al Yankovic Story isn’t really an auto-biopic arguably a parody of one (think at times, Boogie Nights).

While there are touchstones in the movie that are accurate when it comes to Yankovic’s life –i.e. he recorded the “My Sharona” parody ditty “My Bologna” in a bathroom, his parents bought an accordion for him off a traveling salesman, while Dr. Demento rocketed the performer to pop star fame– there’s a hell of a lot that’s hysterically untrue. Read, Yankovic (portrayed by Harry Potter‘s Daniel Radcliffe) never had a long,  passionate romance with Madonna (played here by Evan Rachel Wood).

Let’s start with Radcliffe’s reaction when he first received the script: “I was like, ‘Whoa? What?’ Surely there are definitely a few people I could probably think of, like a closer starting point to that,” says the actor who stands at 5’5″ to Yankovic’s towering 6′-plus.

“But then I read the script, and went, ‘Oh, right, accuracy isn’t what we’re going for here,'” the How to Succeed in Business Without Really Trying Broadway actor adds; director/co-writer Eric Appel and co-writer Yankovic prizing him for his song and dance skills (“Even though I don’t sing in the movie,” says Radcliffe).

Wood is sublime as Madonna, nailing the pop idol’s New York whine and gum snap. How did the filmmaker know she could pull it off? From Wood’s Funny or Die resume.

The jumping off point for the Madonna and Yankovic fling in the film was spurred by the latter having heard through the grapevine that the “Like a Virgin” singer always wondered when Weird Al would parody her song (that track of course being “Like a Surgeon”).

Listen to our conversation above with Radcliffe, Wood and Appel about how the film got off the ground.

The streaming movie, which played the Midnight Madness section at Friday midnight, played like a rock concert complete with rhythmic audience clapping and a street dance crew that preceded the TIFF premiere.  Weird: The Al Yankovic Story hits Roku on Nov. 4.

The Deadline Studio is sponsored by dr Liza + the[fix] and Watford Group. Special thanks to our partner Soluna