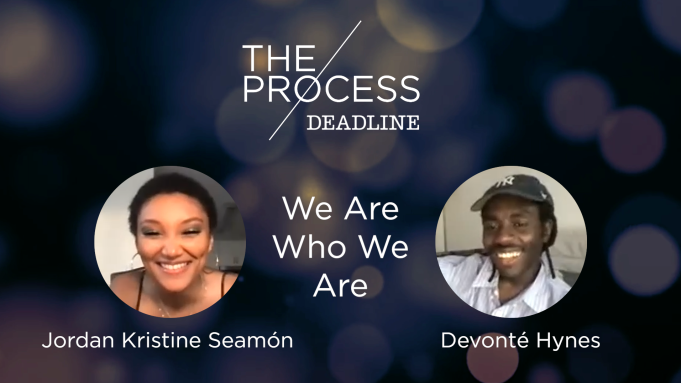 Composer Devonté Hynes had a “surreal” experience working on HBO and Sky Atlantic’s drama, We Are Who We Are.

On the series co-created and directed by Luca Guadagnino, he would see fictional characters interact with his music like never before. While penning his first TV score for the project, the artist (also known as Blood Orange) would also appear as himself, acting in one scene in the final episode, and performing live in others. And then, there was the scene, which saw the show’s two main characters, Fraser (Jack Dylan Grazer) and Caitlin (Jordan Kristine Seamón) recreating his music video for 2013 track, “Time Will Tell,” beat by beat.

“It’s so good. It really touched me. I still can’t believe that happened, actually,” Hynes says of the homage to his work. “It’s like one of the weirdest, most surreal but amazing things that’s maybe happened in my life.”

In the latest installment of Deadline video series The Process, Hynes appears virtually alongside Jordan Kristine Seamón, one of the breakout stars of We Are Who We Are, to further break down his experience with the show and his approach in penning its score.

The coming-of-age drama, which debuted in November of last year, centers on two American teenagers coming of age while living on an American military base in Italy, examining themes of friendship, first love, and identity.

In We Are Who We Are, Seamón found a breakthrough screen role, landing an Independent Spirit Award nomination for Best Female Performance in a New Scripted Series. While acting, she also writes and performs R&B and Urban Pop music under the name J.K., releasing her first album, Identity Crisis, last year.

An English singer-songwriter and record producer best known for his five albums under the name Blood Orange, which bring together elements of R&B and electronica, Hynes first ventured into scoring with Gia Coppola’s acclaimed 2013 feature Palo Alto. Since then, he has worked on 2019 drama Queen & Slim, starring Daniel Kaluuya and Jodie Turner-Smith, Coppola’s new film Mainstream starring Andrew Garfield, and writer/director Rebecca Hall’s critically acclaimed Passing, which premiered at the 2021 Sundance Film Festival.

(The 35-year-old artist’s score for Mainstream is out now on Milan Records.)

In his appearance on The Process, Hynes breaks down the “weird path” that led him to We Are Who We Are. While he says he was nervous about appearing in the series as himself, writing music for the show proved to be much more natural. “This show and the performances, too, it really hits,” he says. “I didn’t have to search far for the emotion to do it.”

When Seamón asked Hynes about his score for a biking scene in the show, featuring her character Caitlin, he noted that the show and its characters’ journeys resonated with his background, and intense feelings from his own time coming of age. “I grew up in Essex, which is like to the east of East London, and so I would go on really long bike rides by myself, to places where I didn’t know anyone, confused in my mind, unsure of who I was, where I was going, who I wanted to be,” he shares. “I really related to that in the show, that sense and that feeling.”

Subsequently, Hynes and Seamón got into more detail about the music video for “Time Will Tell,” in terms of the original shoot and the recreation Seamón was a part of.

Seamón shared that she was “terrified” when she was told about this moment in the show because she wasn’t aware of the scene when she first signed on. At the same time, she couldn’t help but express her admiration of the original piece. “I watched the video like a million times once they told us that we were going to be performing, and it’s beautifully shot,” the actress says. “It’s so, so pretty, and you look amazing in it. I genuinely love it.”

She and Jack Dylan Grazer would nail the recreation by working closely with the original video’s choreographer, Juri Onuki. Seamón was baffled to hear that Hynes shot just three takes in bringing “Time Will Tell” to the screen. (Hynes believes the first take was the one that made it to the screen.) “That’s so impressive. Really, it is. It took us like 20 takes of practice, and then when we actually started shooting, we did 10 takes,” she says. “10 full rounds of dancing that entire thing, and they definitely didn’t use the first one because the first one was trash. I think they probably used the 10th.”

Part of why it was surreal for Hynes to see the music video recreated on television was because it originally was a very “last minute” project—a “simply done” piece which he also described as “such a random thing done in like 2012.”

The musician said seeing his Blood Orange video enter the arena of fiction made him think of his work in a different way. “I have a weird relationship with my music…in regards to knowing about the life that the music has after I’ve made it,” he says, “because I’ve never read a Blood Orange review. I just can’t do it, and I don’t ever do it.”

While his Blood Orange music is immensely popular, Hynes has only started to performed it live in the last couple of years. He’s also getting used to a media landscape that didn’t exist as recently as nine years ago, in which artists get instantaneous feedback to their work via social media and other channels. “The album that [“Time Will Tell”] is on was released in a time in the world—and also, I think career-wise for me—where releasing music, you didn’t really get a response back digitally. I think nowadays…you somewhat instantly know how people feel,” he says. “So, all of that is to say that I hadn’t really thought about that song, and I hadn’t thought about where it could land, and where it could live. So, watching this show kind of made me think about that. I guess that’s just a long way of saying it’s really cool.”

During his conversation with Seamón, Hynes also broke down his process as an artist, outside of any particular project, noting that it actually hasn’t changed much since the time he was 10. “It’s interesting because I don’t really play around on instruments that much. I guess what I mean by that is that I play the instruments, but I don’t just sit at a piano and see what happens,” he says. “I really write a lot in my head, and I think that comes from when I was younger, not necessarily having instruments, but feeling quite musical.”

Of course, a major component of finding one’s own musical identity is listening to work of other artists—and thus, it’s always been important for Hynes to listen to “absolutely everything.”

“It’s all very feelings-based for me,” he adds, “and so if a piece of music gives me a particular emotion…I’m always aspiring to try and work out what it is in that music that’s given me that particular feeling.”

Later, Seamón and Hynes talk about the projects they have coming up. At the moment, it seems that Hynes is setting his Blood Orange project to the side to focus on others. “I just worked with a band called Wet, who are New York friends of mine. I just worked on a couple of songs with them—and then like the tiniest amount of Blood Orange stuff,” he says. “There’s a long way to go. That’s going to be like dropping in 2026 or something, I don’t know. It’s moving at a snail’s pace right now.”

Meanwhile, Seamón is working on her second album and writing a TV show with friends. The actress noted that she wrote her first album while she was on set, releasing it on her parents’ anniversary, as a gift to them. “It seems sweet,” she jokes, “but I really just didn’t have anything else.”

For Seamón, it was an unusual challenge to find herself writing an album, while handling a demanding acting role. But at the same time, each project elevated the other. “It was definitely an interesting experience, but I think a lot of the songs that I wrote on that album—really, a lot of the just general musical creativity that I was feeling during that time—came from playing the character of Caitlin,” she shares. “I don’t know if I would have been able to write at the caliber that I wrote, with such intensity, if I didn’t play Caitlin.”

Seamón and Hynes also touched on their respective “music goals,” or lack thereof. Interestingly the one thing Hynes hopes to check off a bucket list, at some point, is writing an opera. Seamón, meanwhile, would like to follow in Hynes’ footsteps, as a composer in film and TV.

To check out Seamón and Hynes’ entire conversation on The Process, click above.

For a look at the original “Time Will Tell” music video, and We Are Who We Are’s recreation, click below.